A view from Galway: lessons from Ireland’s darkest days.

Michael, they have taken you away
For you stole Trevelyan’s corn
So the young might see the morn
Now a prison ship lies waiting in the bay

Such are the emotive lyrics of the Irish folk ballad `The Fields of Athenry` written by Pete St John and performed by many famous musicians including Paddy Reilly and The Dubliners. The song tells the story of `Michael` from the County Galway town of Athenry who has been condemned to a life of penal servitude in Australia for `stealing` food to feed his family during the great famine.

The beautiful folk song is popular with many sports fans especially those of the Glasgow Celtic and Irish national soccer teams.

I’m writing this from Salthill, a seaside resort near Galway in the west of Ireland. Are there many Australians here? Ask a silly question… the town is heaving with them including half the guests at my BnB.

Many visit the local museum by the Spanish Arch though they are less inclined to sign the visitors’ book than the more garrulous American tourists.

The character of Michael and his wife Mary may be fictional but what was the truth of this terrible famine – shocking even by Victorian standards of poverty? 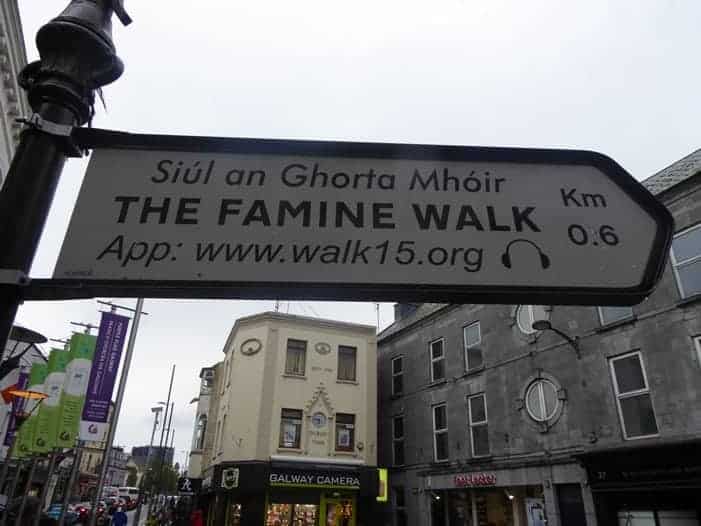 The failure of the potato crop on which so many Irish people depended led to the horrific food shortage of 1845 -1849 that led to the deaths of a million Irish people and the forced emigration of a million more. Ireland had a population of around 5 million in 1800, 7 million in 1821 and then about 8½ million in 1845, the year the famine started. This rate of growth while considerable was actually below the European average at the time.

When the mass starvation at last abated in 1849 some 6½ million Irish remained many of whom had little choice but to try their luck in the horrendous `coffin ships` which sailed from many west coast ports, including Galway, to North America and Australia.

The condition of the starving Irish was described by Helen Litton in her book `The Irish Famine`:

“The most fatal effects of starvation in the appearance of the poor people was a swelling about the face and a peculiar turn of the eye … they were deformed: they were not able to walk and they became languid and careless about what became of them.”

The question which is so often asked is why was so little done to alleviate this dreadful situation? How could those in charge be so callous and unfeeling?

The 1838 poor law divided Ireland in to 130 poor-law unions, each containing a workhouse. Boards of Guardians, elected by local ratepayers and responsible to a resident commissioner in Dublin, regulated each union. The workhouses were designed to house 100,000 destitute people, well short of the 2,400,000 the royal commission had declared in 1836 to be in a state of `poverty`.  The act aimed to discourage `pauperism` by enforcing a harsh regime of work, diet and segregation by age and sex. Hated by the poor and immortalised in the writings of novelists like Charles Dickens these virtual prisons were rarely all full before 1845.

The consumption of potatoes by the poor was extraordinary, for example an adult male worker would likely eat around 6 kilos (13 pounds or nearly a `stone`) a day. Remember meat, cheese, fruit and vegetables were unaffordable luxuries for the poor.

The prevailing economic ideology of the day was one of `laissez faire` which was prevalent among both the major political parties, Whig and Tory.  Basically, it meant let events run their course, wealthy individuals should be allowed to pursue their own interests with the assertation that the government should interfere as little as possible. Not only were the rights of property sacred; private enterprise was revered and respected and given almost complete liberty and on this theory, which incidentally gave the employer and the landlord freedom to exploit his fellow man, the prosperity of nineteenth-century England had unquestionably been based.

The callousness of the leading men of the day is shocking to behold – while Sir Robert Peel did purchase £100,000 worth of Indian corn to alleviate the situation this was a drop in the bucket as it was estimated that £3.5 million would be required to feed the starving masses.

The name most associated with the famine and hated to this day is senior civil servant and colonial administrator Sir Charles Trevelyan, as remembered in the song. He disapproved of the Irish; the cast of his mind, his supposed good qualities were such as to make him impatient with the Irish character. Trevelyan, according to historian Cecil Woodham-Smith, had a `remarkable insensitiveness`. William Henry, in his book ‘Famine – Galway’s Darkest Years’ says: “His attitude towards the Irish people was appalling. He believed that the famine was a punishment by God on an idle, ungrateful and rebellious country. `Trevelyan is immortalised in the song `The Fields of Athenry`.

For many Irish their only hope of salvation was to undertake the incredibly dangerous voyage to the new world in ghastly, jerry built `coffin ships`. As many as a fifth of those on board perished of hunger and disease during the immensely long sailings to Canada and the US, and the even longer crossing to Australia.

Ship owners took advantage of the situation by providing as little food as possible and because of this many people had to rely on the charity of fellow passengers for sustenance.

In the insanitary conditions on board disease was rampant. The trip to the US took 6-8 weeks on average while the journey to Australia was more than double that. Even at their journey’s end the starving Irish did not always get a warm welcome. On arrival at Boston in 1847 the brig Serph was turned away with all its passengers, many suffering from fever, and ordered to go to New Brunswick in Canada while the brig Mary was refused entry to the US and told to go to Halifax, Nova Scotia.

Free passage to New South Wales with provisions and medical care was offered to agricultural labourers, shepherds, farm servants and female domestic staff of `good character`. To this day many Australians are proud of the bravery of their forefathers in making such a hazardous voyage.

In Australia, the Great Irish Famine Monument was erected in the grounds of the Hyde Park Barracks Museum in Sydney. There are numerous other memorials and parks around the globe including a poignant bronze reconstruction of a `coffin ship` in Murrisk, County Mayo.

Historic echoes in the present

The famine may be a thing of the past for some but sadly, there are many callous Trevelyan like politicians around today who are quite prepared to sacrifice the lives of millions in wars and blockades. Remember former US Secretary of State Henry Kissinger whose saturation bombing policies in South East Asia caused 6 million deaths in the 1960s and 1970s?

Think of the crippling embargo of Iraq in the 1990s which led to the deaths of around a million people including half a million children. When asked by CBS interviewer Lesley Stahl in 1996 if the price was `worth it` the then US Ambassador to the United Nations Madelaine Albright infamously replied: “I think this is a very hard choice, but the price — we think the price is worth it.”

Some argue the real reason for the horrific sanctions on Iraq was to protect the price of Saudi oil – market forces must prevail as laissez faire politicians like Margaret Thatcher and her acolytes used to maintain.

As I write this, the country of Yemen is being blockaded and bombed by the Saudis, our `democratic freedom loving` head chopping allies – with British made bombs and yet this crime is barely reported in our `free` press.  The people of Gaza are living a life of utter misery in the world’s biggest open-air prison from which they cannot escape – not even on `coffin ships`.

Former US President Ronald Reagan praised what he called: “The magic of the market place”

I wonder what `Michael` would have said to that?

As the prison ship sailed out against the sky
Sure, she’ll live in hope and pray
For her love in Botany Bay
It’s so lonely round the Fields of Athenry

TOP IMAGE: Starvation in Ireland in the 1840s