Gurrumul Yunupingu will be joining a host of stars to perform at the Queen’s Diamond Jubilee Concert on 4 June. 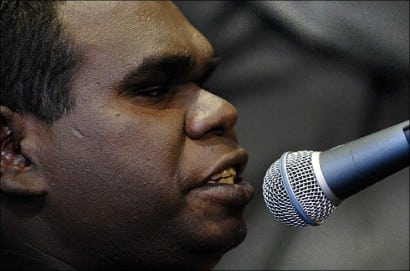 Gurrumul Yunupingu will be joining a host of stars to perform at the Queen’s Diamond Jubilee Concert on 4 June.

The blind indigenous Australian singer and musician, who also performed for Her Majesty The Queen and His Royal Highness The Duke of Edinburgh in Canberra in October 2011, will be joining artists from across the Commonwealth to perform ‘Sing’, the Diamond Jubilee Song written by Gary Barlow and Andrew Lloyd Webber.

The concert will be broadcast live on BBC One, BBC One HD and on BBC Radio 2 in the UK and to millions around the world.

Gurrumul’s performance at the Diamond Jubilee concert is the latest in a long line of honours for this shy man from the remote Elcho Island. Having received awards and global acclaim for both his debut album Gurrumul and his second album Rrakala, he has recently performed for Barack Obama, Crown Prince Frederick and Princess Mark of Denmark.

Gurrumul will then be returning to Europe in July for a run of rare festival appearances including Denmark’s Roskilde Festival and the Blue Balls Festival in Switzerland.

What other Australian acts and artists would you like to see feature at the Jubilee concert? Tell us below: