It was Australia’s night at London’s ultimate burlesque event as dancer Bonnie Fox and host Reuben Kaye stole the show. 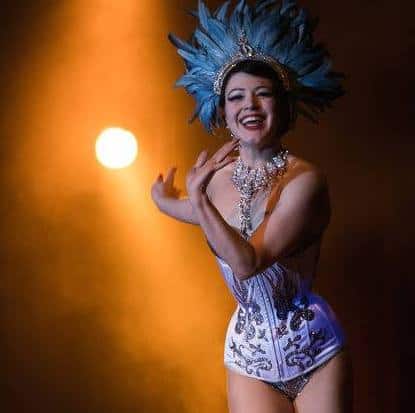 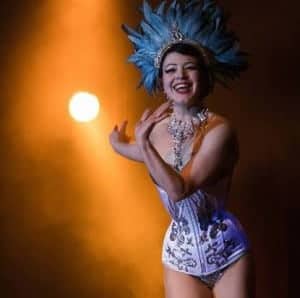 The International Crown, held at Bush Hall on Saturday evening saw 14 women from countries across the world attempt to outdo each other with lavish costumes, outrageous performances and stunning ability.

This year there was no mistaking her rightfulness to claim first place.

Entering the stage in a red cape and gold gloves she stripped them away to unveil a sequined flapper dress.

Dancing an authentic Charleston in perfect form, Bonnie encapsulated the 1920’s glitz and glamor of F. Scott Fitzgerald’s The Great Gatsby; the inspiration for her performance.

The dress was cast aside to reveal a white corset encrusted with blue Swarovski crystals and later it too was torn off to wild cheers and applause leaving Bonnie adorned in diamanté nipple tassels and tincy wincy lingerie.

Prior to the beginning of this year’s competition Bonnie told the Australian Times “I’m not so much interested in the title, I don’t think that’s the reason why most of the artists in the Games enter.”

“Since each burlesque act is so unique and personal, judging them one against the other is entirely subjective,” she said.

Yet Bonnie’s performance was the clear stand out on the night with the judges returning tied results for both second and third place.

While Bonnie received the official crown it was another queen who stole the show.

Fellow Aussie and WBG host, Reuben Kaye, had audiences at all six sell-out events in raptures with his expertly timed comedy and wicked tongue.

An international entertainer, Reuben’s rendition of Australia’s alternate national anthem, Land Down Under, was cabaret bliss for the crowd.

The WBG titles, including British Crown and Newbie Crown, were awarded over four days of competition, which culminated in Sunday night’s ‘best of the Games’ spectacular.

The city’s next major event is the London Burlesque Festival to be held from 14-25 May 2014. Tickets released 1 December.