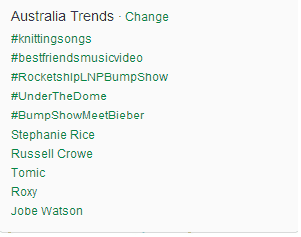 #Knittingsongs provides an array of the best knitting puns in the Twittersphere.

Starting off with a touch of Aretha Franklin, @harrypusspuss was one of the first to jump on the bandwagon. After tweeting “You make me feel like a natural Woollen,” the hash tag quickly caught on.

You make me feel like a natural Woollen #knittingsongs

A public health academic from Wollongong followed with some Aerosmith writing, “Still Haven’t Found What I’m Knitting For.”

Australia’s very own Gotye was also adapted into a knitting sensation: “Now you’re just a bobbin that I used to sew” said @LJPsavesavesave.

The SQib went just that bit further, making things a little political: “I can’t seem to face up to the facts Rudd’s got me nervous and I Can’t Relax PSYCHO KNITTER Ke ke ke ke Kevin”.

The hash tag originates from Preston Towers, a Twitter user who aimed to highlight the absurdity of the mainstream media response to the images of Julia Gillard knitting in a humorous way. After thousands of users contributed their pieces, Towers said: “It’s been great to see the wit of people tonight.”