Australians at the 2012 British music festivals

MUSIC FESTIVALS | Comprehensive list of Australian performers at this year's festivals across the UK. 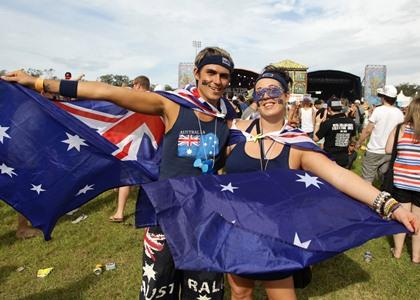 MUSIC festivals are awesome! Enough said. But what is even more awesome is getting a little slice of home brought right to your festival door. That’s exactly what’s happening this year when some of our favourite and beloved Aussie bands are coming over for various music fests in the UK and Europe.

2012 seems to be producing a bumper crop and already Cold Chisel, Hilltop Hoods, Wolfmother, The Temper Trap, Tim Minchin and many more are confirmed to take to a stage near you. There are so many amazing Australian artists on their way this summer, it would be rude to miss out on seeing at least one of them.

So here’s a list of which Aussies are performing where. Check it out, cut it out (stick it on the fridge), and get all your Aussie mates excited. Because our boys and girls are coming to show this northern hemisphere lot how we rock Down Under. Enjoy!

The Jezabels — T in the Park, Hop Farm

Pendulum — Run To The Sun, Tomorrowland

Heaps of Aussie acts will be hitting Brighton, Liverpool & London for The Great Escape, Liverpool Sound City and the London Aussie BBQ respectively this year.

Some will play one of the events, some will play all — so here’s who you should be watching out for:
The Jezabels, Pond, Jinja Safari, Last Dinosaurs, Step Panther, Millions, Inland Sea, Ben Salter, Bonfire Nights, Oliver Tank, Jackson Firebird, The Bowers, Sietta, Emma Louise, Ironside + more.

The chatterboxes: Because sometimes there is more to life than music…

Also see: Aussie rock and what it means to me