The Australian invasion of Hollywood has never been more evident than in Stoker, a Hitchcock style thriller now showing in UK theatres. 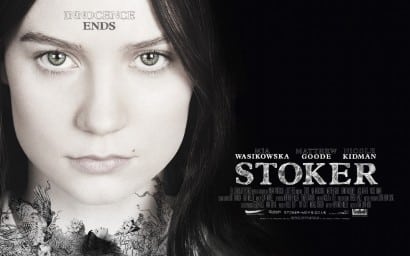 The film itself is a psychological thriller about a mother and daughter, who, in the midst of mourning the death of their husband/father, become newly acquainted with ‘Uncle Charlie’, the deceased’s brother.

Mia Wasikowska is every part India Stoker, a Dexter like teenager with the disposition of a hunter. With sharp eyes, she is instinctual, invisible and vigilant as she tries to discover the truth about her uncle.

The actress, born in Canberra, first appeared in the Australian medical drama All Saints. Her star rose to prominence when in 2010 she fell down the rabbit hole in Tim Burton’s Alice in Wonderland.

The youngest of the three Australians, Wasikowska found the experience of working alongside her more seasoned peers “amazing”.

When asked about Nicole Kidman, who plays India’s narcissistic mother, Wasikowska told UK’s Metro: “Being a young actor coming from Australia, she’s the ultimate role model. She really took me under her wing and was really giving of her experiences of growing up in movies.

“Nicole was one of the first people to really transcend or cross over into working internationally, so I would love to do the same thing.”

Nicole Kidman of course needs no introduction. 2013 marks 30 years since her first film role as Judy in the Australian classic BMX Bandits and ten years since she won the Best Actress Oscar for her performance as Virginia Woolf in The Hours. Critics have praised her performance in Stoker, even suggesting it is her finest work in the last decade.

Rounding out the strong Australian contingent, Jacki Weaver features as Gwendolyn, Charlie’s aunt. Proving that age is no barrier, Weaver has had Hollywood calling in recent years after receiving great acclaim for her chilling performance in Animal Kingdom. She is the master of making audiences feel uncomfortable and her performance in Stoker, though small, is no exception.

The casting? Spot on. The story? Hitchcockesque. The direction? Absolutely beautiful. Almost every shot could be a striking photograph in itself. The man behind the lens is the highly acclaimed Park Chan Wood, a South Korean director. His ability to escalate drama through restraint, rather than dialogue or action is highly creative, and will have watchers captivated right from the opening credits.