Australian rock legend Daryl Braithwaite has told The Age he thought Daft Punk were a heavy metal band when offered the chance to appear on Daft Punk’s new record Random Access Memories. The global album launch is set to be held in the regional NSW town of Wee Waa, 500km north-west of Sydney, on 17 May alongside the 79th Annual Wee Waa Show. 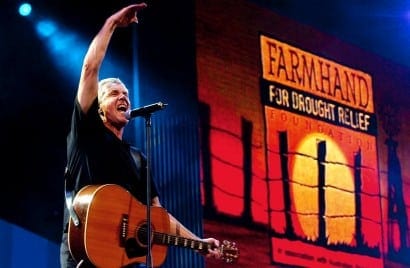 A sample of ‘We Ride Tonight’ by Braithwaite’s ‘80s rock band The Sherbs (also known as Sherbet) features on the closing track, ‘Contact’, of the anticipated new album, due for worldwide release on 17 May. The launch of the album is set to take place in the regional NSW town of Wee Waa.

The approach by Daft Punk through the publishers of ‘We Ride Tonight’ was “out of the blue” said Braithwaite. He has told The Age all he knew about the French house duo was the fact “they’re robots” and “wear helmets”. Although he thought they were a heavy metal band he did know “they’ve been successful for a number of years”.

The album Random Access Memories is set to be one of the biggest releases of the year. The record will also feature cameos from Pharrell Williams, Paul Williams, The Strokes frontman Julian Casablancas and Panda Bear. However, it has been reported Daryl Braithwaite is the only sample to be included in the album.

“We think Wee Waa is so uniquely Australian, so the folks at Sony Music along with Daft Punk thought it fitted the bill perfectly,” Mayor Bolton told the Narrabri Courier.

“Daft Punk is known for breaking down barriers and coming up with new creative, innovative ideas to launch their albums.”

The launch of the album will coincide with the 79th Annual Wee Waa Show, with the album being played from a specially built stage at the Wee Waa Showground.

4000 tickets are to be made available to the event — double the population of the town of Wee Waa. The town, which is 500 kilometers north-west of Sydney, has two caravan parks and two motels.

“It’s great for Wee Waa and fantastic for the shire, the flow on effect from this will be fantastic, especially for all businesses in the area,” said Wee Waa Show Society president Brett Dickinson.

The original ‘We Ride Tonight’: