"Holy Crap we won the Australian Music Prize” the hip hop band, Hermitude posted on their Facebook page along with a photo of them with a novelty size cheque for $30,000. 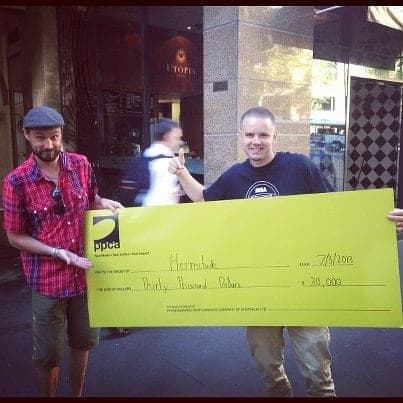 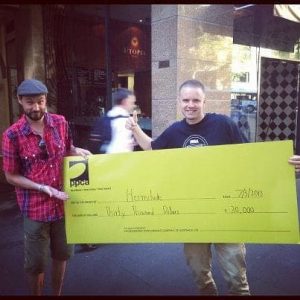 TAME Impala, The Presets and Flume were among nine bands and solo artists in the running to win The AMP (Australian Music Prize), which aims to encourage Australian music excellence. In a field of such high calibre artists, it was Hermitude who ultimately took the gong for their album HyperParadise.

And if victory couldn’t taste any sweeter, the band also trumped their manager Tim Levinson, known as Urthboy, who was nominated for his album Smokey’s Haunt.

Hermitude comprises the musicianship of Luke Dubber (Luke Dubs) and Angus Stuart (Elgusto), both originally from the Blue Mountains in New South Wales. The two started recording and producing together as Hermitude over a decade ago. Their fourth album HyperParadise showcases their innovative ability to fuse genres, both new and old, into tracks which are seriously cool. The title track was voted 18th in Triple J’s Hottest 100.

It has been a very good year for the band, and their album, both of which have received a number of accolades. They took out an AIR award, two SMAC awards, an Aria nomination, a Triple J Award nomination, and now the AMP.

Modelled on Britain’s Mercury Prize, the aim of the AMP is to financially reward and increase exposure for an artist or group of artists. In addition to the cheque for $30,000, Hermitude will receive greater recognition from the music industry, who watch the prize closely to see the future promising artists.

Previous winners of the prize include The Jezabels, Lisa Mitchell and Cloud Control.