The arrival of the Australian Chamber Orchestra (ACO) on stage at London’s Cadogan Hall earlier this month may not have been directed by Danny Boyle or introduced by Stephen Hawking. 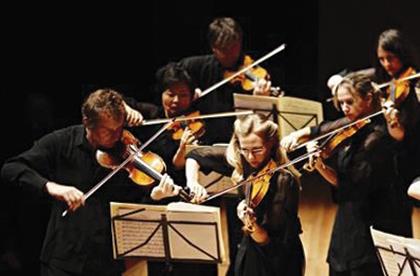 THE ARRIVAL of the Australian Chamber Orchestra (ACO) on stage at London’s Cadogan Hall earlier this month may not have been directed by Danny Boyle or introduced by Stephen Hawking.

But at the end of the evening not one audience member doubted that they had witnessed elite Australian performers in action.

Tognetti maintained centre stage for the late Australian composer Richard Meale’s Cantilena Pacifica before the ACO artistic director called upon the collective talent of the entire ACO for a courageous arrangement of Ravel’s string quartet in F major.

Overall, the arrangement was a success and the 17-odd musicians maintained the subtleties and precision of the original four-person composition. It is not without evident success that these performers spend so much time together; from the audience it was easy to note the attention paid by the musicians to one another as they moved from the dolce of the first movement to the fingerboard-slapping pizzicato of the second. While some moments may be benefited from a stricter paring back of the ensemble, particularly in the last movement, the alternating power and delicateness of the overall work was impressive.

American soprano Dawn Upshaw joined the chamber musicians for three lieder in the opening of the second half. In a brief but technically diverse performance, Upshaw sang of love, life and death, including an excerpt from Schoenberg’s String Quartet No. 2, which the composer dedicated to his wife who was sleeping with the next-door neighbour at the time.

The night at Sloane Square ended with Schoenberg’s Transfigured Night. This work has become something of a staple for the ACO. Audiences in Australia are regularly treated to the group’s mastery of the complex work and it was clear from the final applause and cheers that London was as wowed by the group as audiences regularly are in Canberra, Sydney and Melbourne.

The ACO have now performed more than 20 times in London as part of their regular international touring. When away from its harbour view headquarters in Sydney’s Circular Quay, the orchestra considers London its principal home outside Australia.

The ACO certainly has its fans here; British music critics cannot help but resort to Australian clichés of muscularity, friendliness and warmth in describing the music and the musicians.

But whether the orchestra’s international success lies in its music making or in its memorable collection of hairdos and amiableness, the recipe is obviously working. The ACO posted a surplus of nearly $3 million in 2011; plenty for future tours to London.

The ACO’s next stop is Festival Maribor in Slovenia.