Feathers, sequins, skin and Australia’s own Sharon Davis aka 'Bonnie Fox' will take to the stage in London this month for the World Burlesque Games, London 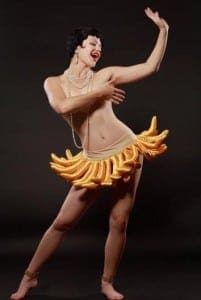 SHE enters the stage wearing a red velvet coat, gold gloves and blue feather headdress. As the music tempo picks up, the coat is cast aside to reveal a glittering flapper dress with beaded fringe and Swarovski crystals.

Sharon Davis, stage name Bonnie Fox, dances an authentic 1920s Charleston until peeling off her dress to reveal a tight lacing corset and lingerie – though it too wont be worn for long.

“No true 1920s flapper would bear to be constricted by a corset, so it has to come off… along with everything else.”

This is burlesque — flirtatious, brazen and sensual. In a time when sexuality fails to surprise, this art form captures the imagination and leaves the audience gasping for breath.

“Sex is everywhere today, but with an element missing – there is no mystery, no allure, no fantasy,” Sharon says.

“Burlesque has that sensual magic that strip clubs, pornography and sex in the media just don’t have. Burlesque is an old fashioned tease combined with a true glamour spectacle.”

Perth raised now London based, Sharon will represent Australia at the World Burlesque Games later this month. Her act is inspired by the glamour and decadence portrayed in the parties of F. Scott Fitzgerald’s The Great Gatsby.

Having been awarded second place at last year’s event, she’s returning not for the title but the elite competition.

“The Games push me to polish my act and give me an opportunity to meet and be inspired by other performers, and perform for a broader audience who might not normally attend a more intimate burlesque show,” says Sharon.

A sell-out crowd is expected at London’s Madame Jojo’s and Bush Hall to be captivated by dozens of performances. The spectacle is intimate not in size, but nature. Feather fans, sequined gowns and curious costumes make way for smooth flesh, pert buttocks and pink nipples. 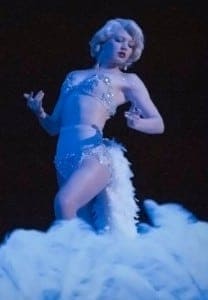 “Sometimes it concerns me how comfortable I am with being naked in front of hundreds of people,” exclaims Sharon.

“The stage lights are warm, like a loving embrace – honestly, I don’t feel naked when I’m on stage.”

“I don’t feel vulnerable when I striptease, no.  I’m in control – the audience has to work hard, to get me to take off each piece of clothing. If they don’t cheer and scream for it, I will quite happily leave everything on, give them a bit of a wiggle and exit fully clothed.”

Sharon’s performances are the expression of her lifelong love of the jazz age and the styles born from the 1920s to 40s era — burlesque, swing, Lindy Hop, Charleston and blues.

Having begun her career in Perth, she launched onto the international stage after relocating to London.

“The Australian dance scene is amazing. For swing dancers it’s one of the most active scenes in the world, and definitely one of the friendliest. I left to see the world, and push my dancing to a higher level, but I miss Australia deeply,” says Sharon.

It was a sacrifice that has paid off — Sharon is considered one of the world’s best dancers in her genre.

A whirlwind schedule takes her to all corners of the globe where her performance, choreography and instruction are in hot demand.

“I am the director of the annual European Swing Dance Championships, which I ran in London this year at the end of October. 700 of the world’s best swing dancers converged on London to battle it out, to spectacular result. 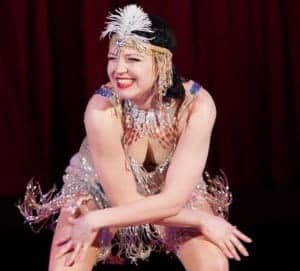 Before that I was in Sweden and the USA, I just got back from Budapest, and coming up I will be working in Genova, Dublin, Milan, Zurich, then I am spending Christmas in Phuket with my family.”

Yet it’s London, a city with all the glitz and glamour of a burlesque routine, that has Sharon mesmerized.

“I love seeing shows in the West End, and there are so many beautiful art deco bars in the hotels near Covent Garden.

Truthfully where I spend the most time is in cafes in Dalston and Shoreditch near where I live. Tea, coffee, cakes, this is London for me. The cafe culture in East London is outstanding.”

“Most Aussie foods I can get here, although Tim Tams still elude me.”

Sharon Davis will perform under the stage name Bonnie Fox at the World Burlesque Games in London on November 20-24. For more information, and to buy tickets vist londonburlesquefest.com