THE Apollo has seen the darker side of the moon. I am of course referring to the amazing Aussie tribute band, The Australian Pink Floyd Show (TAPFS), who have just wowed audiences at London’s Hammersmith Apollo. 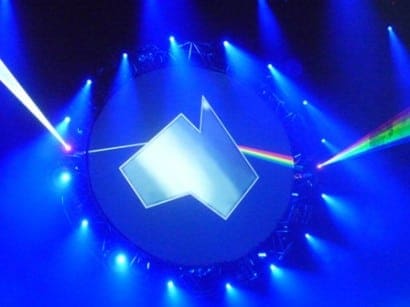 THE Apollo has seen the darker side of the moon.  No I’m not talking about a rocket fuelled, NASA-funded space discovery mission. I am of course referring to the amazing Aussie tribute band, The Australian Pink Floyd Show (TAPFS), who have just wowed audiences at London’s Hammersmith Apollo.  Mind you, there were plenty of spaced out moments to go around.

TAPFS are prolific. They’ve been around since the early 80s and they have even played alongside the real Pink Floyd (at David Gilmour’s birthday). I spoke to founding member Jason Sawford earlier last month and he made some fearless claims.

“I think we put on a bloody good show now.  It’s a huge show; musically we try and get things note for note.  I think a lot of people come out feeling that it sounds just like a Pink Floyd show which is what we aim to do.”

As a Floyd fanatic, this guy from Adelaide was promising a lot.  Talk about hype. TAPFS had a lot to live up to but, boy, did they deliver!

Some people just know how to put on a show. Pink Floyd were not solely about the music. They were about the trippy laser beams, the psychedelic images, the some-poignant, some seemingly irrelevant videos and not to mention the impossibly imposing inflatables.

But TAPFS didn’t miss a trick. The 10-foot tall inflatable kangaroo was a touch. And the huge productions and ridiculous all-encompassing extravaganzas Pink Floyd were so revered for, they were well emulated in West London by the Aussie tribute artists. 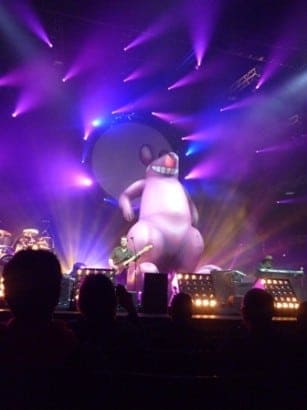 As for the music, well, I can pretty much remember all the famous solos note for note and this outfit barely strayed from one.  It was electrifying.  They played most of the classics from Wish You Were Here to The Wall (complete with a bunch of genuine, hyperactive looking, primary school kids) and they played them convincingly.

The group, which first formed in Adelaide in 1988, has gone through numerous personnel changes over the years but to a member, each of them played out of their socks and they were having a contagiously great time.

Alex McNamara is one of the latest additions to the crew and he is a more than worthy would-be Pink Floyd singer.  Having appeared in the West End rock-opera We Will Rock You, his mysterious apparitions at the front of stage and powerful deliveries were a true homage to the Floyd.

Ripping guitar solos and distinctive chord changes are what Pink Floyd are famous for and any tribute band needs to get that right.  TAPFS certainly did.  The youthful-looking David Domminney Fowler made his guitar cry and sing with an effortless grace, bending and manipulating the notes with perfect precision.

Lorelei McBroom used to sing with the real Pink Floyd and this just goes to show the level of high-esteem at which this Aussie band is held in.  She came on and blasted the audience with a soulful rendition of the classic Great Gig in the Sky.  Words cannot express the beauty of this piece (literally) and the crowd was rapturous.

All the guitarists sang the notes of the solos as they thrashed them out, a sign of confidence and sure-footedness; a sign that this group truly love the Floyd music and that they know it inside out.

The Aussies didn’t only play the classics. Pink Floyd have an extensive repertoire and that’s crucial for TAPFS.   After the show the bass player and singer Colin Wilson told me that“ because we are touring every year, we try to mix it up a little bit”.  He told me that a lot of fans come back to the see show again and again – that’s why TAPFS keep it moving.

As well as being a peerless tribute band, the members here are still musicians and for them, being able to play the lesser-known material and putting their own signature on them is priceless.  And that’s the charm.

This group aren’t just a bunch of mimicking parrots, there is an aura about them, something substantial. They are the real deal and they enjoy making music. Long may The Australian Pink Floyd Show continue!