INTERVIEW | Australian rock band Dead Letter Circus have set themselves up for a manic European tour, including nine nights of continuous shows. They kick off the UK leg tonight at Camden's Underworld. 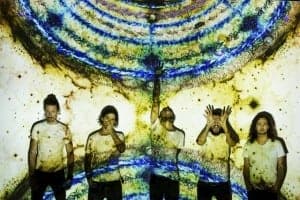 FROM unveiling their album release on MySpace, to opening for mega bands, Muse and Linkin Park, the boys from Dead Letter Circus are storming away from their humble beginnings and growing in to world stage performers.

“The venue that we’re playing in is definitely no arena,” said Benzie, the band’s lead singer. “I’d liken it to the Corner Hotel in Melbourne after twenty years of hard life.”

The band’s debut album brought them to the attention of several major labels, culminating in a deal with Warner Bros Records, a deal which effectively launched their career. After their first album and tour, they decided to break from Warner Bros and sign with Independent label, UNFD to release their new album, The Catalyst Fire, which debuted at number two on the ARIA charts.

Off the back of their early success, they have headlined shows in Australia and around the world. Benzie reminisces about one particular show the band played in Goa, India.

“We didn’t know what to expect, but we ended up playing on a Big Day Out type stage and the crowd were going crazy, more so than any Australian audience we’ve ever played to.”

Their European tour schedule appears manic. With nine nights of continuous shows spanning six separate locations in the UK and three in Germany, it would be fair to assume that the band is attempting an exhausting feat.

As Benzie explains, “this tour is full on, but we’ve done worse.” The band once played twenty-nine shows in thirty days covering several states in the USA.

“Each place was around a ten hour drive from each other. We’d arrive in a new destination, complete a sound check and then we’d go on stage,” Benzie said.

“My memories of that tour is a blur of driving, playing for rowdy American crowds and the interior of bad motels.”

The guys will be arriving in London on the morning of 30 September and they may begin their UK experience with a big English breakfast. Benzie revealed that bass player, Stewart Hill wanted to try every animal on the planet and was quite adventurous in regards to trying new foods.

“If no one tells me what I’m eating, I may try to keep down haggis or black pudding. Stew will be asking for seconds though,” Benzie jokes.

Enjoy a warm beer and perhaps some game meat with Dead Letter Circus on their European tour beginning at the Underworld, Camden on 30 September.