Aussie pianist a Rhapsody in Blue in Manchester performance

Australian pianist Philip Eames was invited to perform Gershwin's Rhapsody in Blue with the North Chesire Wind Orchestra, in Manchester. 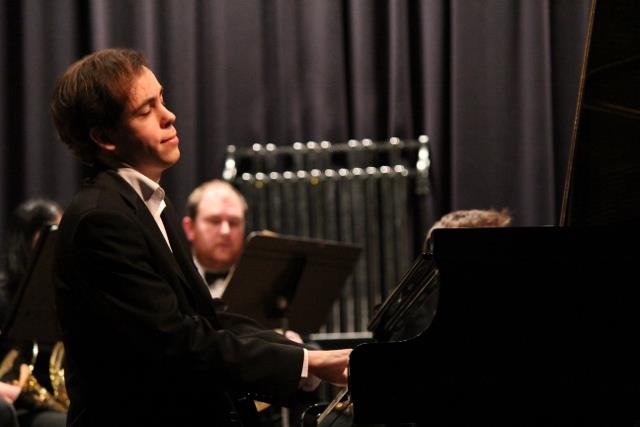 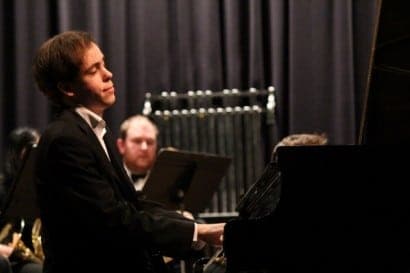 DONNING a blue button up shirt and an unflinching enthusiasm, Australian pianist Philip Eames was a Rhapsody in Blue.

In the studio theatre in Manchester’s Royal Northern College of Music, the North Cheshire Wind Orchestra and conductor Tom Newall are performing their summer show Across the Pond to a full house, featuring soloist Philip Eames performing George Gershwin’s notorious Rhapsody in Blue.

Calmly hovering by the theatre door, Eames makes his entrance coolly, unfazed by minor technicalities such as dim (or lack of) lighting and intimate working space, peeking over at Newall’s instruction through the top board and frame of the grand piano, warranting laughs from the audience.

The humble and seemingly introverted Eames kicked off the piece with steady charisma, following the distinctive starting trill and chromatic glissando by the clarinettist.

As the energy picked up, so did Eames’ enthusiasm, adding light to a dim room in addition to Gershwin’s blue notes and signature jazz melody. With his colourful cadenzas and unstrained arpeggios, Eames was only warming up.

The frequent change in tone and dynamics was impressive, leaving potential minor mistakes unrecognisable. His handiwork ranged from impossibly fast one moment, while collected and leisurely the next, complemented by an unflinching grin and personalised theatricality.

The orchestra, perhaps as transfixed as the audience, at one point missed their entrance – though aside from some flautists with intonation issues, they managed to recover their original energy and meter. Newall and Eames communicated well throughout, despite the obstacles; a partnership that indicated respect and efficiency between the two artists.

After about fifteen minutes, a few intense hair flicks, concentrated crescendos, and what could have been thousands of trickling piano keys, Eames landed the final blow – a killer concluding cadence that resonated for many moments following its execution, leaving us mooching off Eames’ high.

It takes a certain type of performer to pull off Gershwin and Eames’ expertise was most evident in his presentation. Really coming out of his shell throughout, Gershwin and Eames fit together like two power cables, feeding life into one another, charging over time.

As an eccentric Australian and a marvellously talented contemporary pianist immersed in the traditional British music scene, Eames breathed new life into the music unlike many others could, leaving spectators astonished.

“That was just fantastic, I had no idea it would be so thrilling,” remarked audience member Eileen Housley.

“The performance was magnificent,” added Michael Chesterfield. “We’ll be on cloud nine the whole ride home.”

Eames describes the piece as a great artwork that each player must start from scratch.

“It’s great fun to play — it’s almost like a blank canvas, with many possibilities to add colour to it. Anyone who plays it has to enjoy themselves, otherwise you’re missing the point.”

The true joy of Gershwin lies in the character of the performer — and Eames’ character was playful, mischievous, and vivacious.