Summer is always a busy time for Aussie music in London. And that means our resident music editor, Paul Judge, is kept even busier. He's seen some stunning Aussie acts recently from Tame Impala and Ash Grunwald. Check out his reviews. 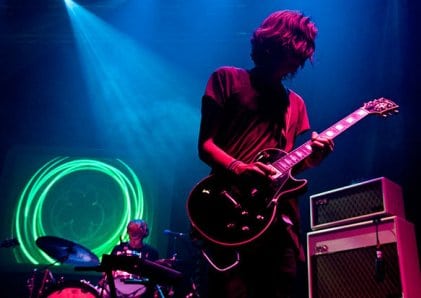 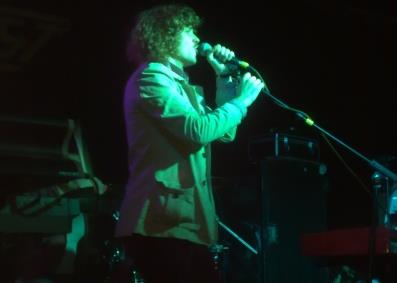 Tim and Jean are two guys from Perth that people in Australia have been talking about since they reached the finals of Triple J’s Unearthed High School music competition back in 2010. Since then, they’ve been touring the country, releasing some ripper singles and supporting pretty important people like Moby. Not bad for a couple of teenagers.

Sneaking into the UK for only a week before jetting back to Australia for the Splendour in the Grass festival, the boys nearly flew under the radar. A timely message from a mate back home saw me scooting down to Hoxton see if hype was true and why they’re being compared to Passion Pit, MGMT and plenty of other electro pop/rock goodness.

After playing to large crowds back home, the small crowd they performed for might have felt a bit weird but they didn’t show it. Adding a drummer and guitarist to their line-up for the live show, it gave a more rock sound to the dance feel of their music. They played a short set but they really pulled off their hit’s ‘I can show you,’ and ‘Veronica’, throwing in a decent cover of Tom Petty’s ‘Freefalling’ for good measure.

Tim is a charismatic front man. When he wasn’t singing or playing an instrument, he was jumping around the stage or banging a drum. Jean you can tell genuinely loves his music, cruising away singing along in a shy sort of way.

The hype is justified; these guys have the potential to go places. Check out their music and hope they head back to the UK soon.

The burly surfer dude who brought the steel guitar and kick box to the mainstream in Australia, Ash Grunwald,  rolled into London for one show only, as part of a European surfing and music tour. 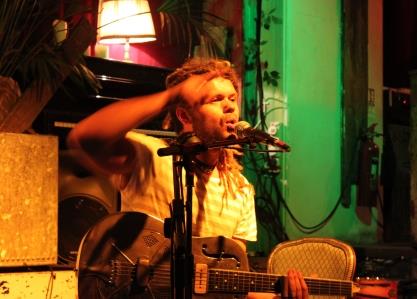 With polite applause, he started with a slow blues number off his new album, then asked “What do you guys want to hear tonight? Give me some requests”. Shouts of ‘Dolphin’ and ‘Whiskey Song’ were thrown out. “Alright then, we’ll play them,” he replied.

That set the tone of the night. Close-up, there was no sign of a set list. Indeed, there was no sign that he needed any sort of structure, he would just play and play he did. With a few new songs and all the old faves, the crowd slowly evolved from sitting down enjoying the music to an impromptu dance floor and sing-a-long encouraged by the man himself to get involved.

Here lies the main reason why his shows are so enjoyable. Not only is Ash a great musician, he’s downright funny and when presented with a small crowd, he was able to turn the show into a jam with some friends. At one stage he remarked how much he smelt and did anyone have some deodorant? A crowd member produced some, Ash had a spray, then continued on happy he was not disgusting himself anymore!

For over an hour he entertained the crowd. He finished off with crowd favourites ‘Dolphin’ and ‘Serious’, a song which is basically about not taking life too serious. It was a fitting theme for the night as his infectious music and humour makes you just want to smile and dance along.

Tame Impala mean business. They are arguably our most successful music export at the moment with critics and international fans lapping them up. The Roundhouse is a formidable venue and playing it, let alone selling it out is no mean feat. But the boys from Western Australia did this last Wednesday as a cheeky little warm up gig before their big Glastonbury performance on the Pyramid Stage (the main stage where Beyoncé and U2 were shaking it).

It’s pretty exciting, having an Aussie act reaching those dizzy heights but I have to admit I am not an expert on their music, bar a few songs, so I was very interested to see what they produced in a live show.

The set was split into two unofficial halves.  The first half they kept it at a slow melodic level in sync with songs like ‘Solitude is Bliss’ which they brought out early. After an extended and very different version of Massive Attack’s ‘Angel’ they proceeded to pick it up a notch and give off some great 70’s sounding distorted guitar rock. They also kept true to singer Kevin’s statement that they wouldn’t play an encore because everything has a finish and an end but they played an extended and solid set until walking off stage satisfied.

You could compare and describe them with a variety of sounds and influences and ponder on what music they listened to as kids. Why bother? They’ve got a sound, it’s called Tame Impala and they carried it through the Roundhouse (and hopefully at Glasto too – ask those lucky buggers who were there to see them) and definitely will do beyond for quite a while.