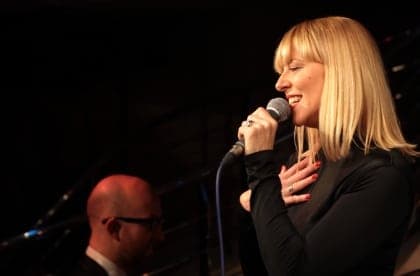 Making a return to performing the style of music that she most loves, Australian Cathi Ogden vindicated her decision to release a new set of timeless Jazz by giving a stellar performance at her album launch in London on Monday 3 March 2014.

Ogden created an exciting effect as she perfectly blended standards such as Peel Me a Grapeand Just You, Just Me with her own compositions many of which are co-written with New York based Jeff Franzel giving us a demonstration of what a diversely talented artist she is.

On Andre Previn’s, Like Young, Ogden and band swung with such precision that it was hard to believe trio and vocalist had come together for this special one off event. On darker, laid back numbers such as the artist’s own composition, State of You vocals were pitch perfect and top notes delivered with such spine tingling power as to elicit applause from the audience mid-song. This is all the more impressive as there was more than a smattering of high level music business executives in the audience who surely attend their fair share of live performances.

As the evening progressed, Ogden used the intimate setting to full effect interacting and riffing with the audience. At one stage such was her command of proceedings that she was able to deliver a nonsense poem as part of her banter which clearly delighted one and all. However, this was just a set up to lead us, under her spell into a section of the show that showcased her own delightfully witty compositions such as, It’s Not Me and Meaninglessnessism.

The show’s finale arrived with renditions of Fate, from Ogden’s first album, Out There and Nina Simone’s classic, My Baby Just Cares For Me. As the call went up for an encore, the audience were on their feet and they practically mobbed the performer – in a very ordered Chelsea set kind of way – as she departed the stage.

Based on this performance both Cathi Ogden and her music deserve a wider audience than we suspect she’s getting, but if word-of-mouth about this show spreads we’ll hopefully see and hear more of this truly impressive performer.