by Marianne Gray
in Lifestyle 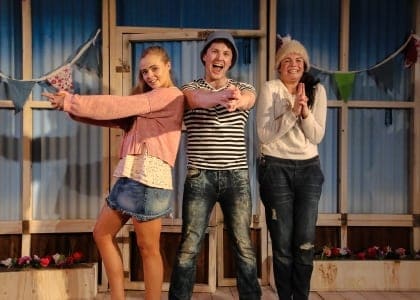 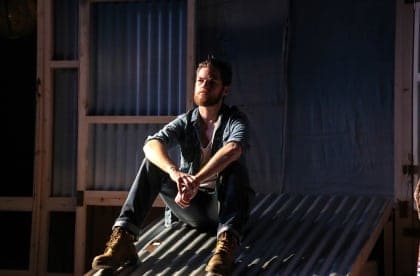 This Australian musical has finally got to the UK having picked up a few awards on the way. A truly unusual and conflictingly funny and sad musical about a family who come from one of those dusty farms with the corrugated iron roof, squeaky fly-screen door and sheep shed. It crosses the generations and cultural changes of a family in a passing of a way of life. The days when farmers were kings are long over and the family has held onto the place because of their late father’s life insurance.

Amy (Home and Away’s Melle Stewart) runs the farm, a drought-ridden sheep station in northern Victoria called Emoh Ruo, which spelt backwards reads Our Home. Her farming is haphazard and ineffectual. Her ailing, sad mother Claire (Craddock, a founder member of The Girls from Oz) is hanging in there as the matriarch but with secrets that should tell the whole story. Her son Shaun (Welshman Arwel) is sweet but a bit of a hopeless case and her sexy daughter Lecy (All Saints) is the one who went to the city and has become a mindless tart with little heart. And then there’s Burke (NIDA’s Rennie with his five star voice), who has a history with the family and comes by to make new history.

This is quite an oddity, poignantly sad and also very funny. With the clever use of music it covers deep issues while sometimes seeming like Australian music hall. Ambitious and unusual, this ain’t Priscilla Queen of the Desert but it’s a really good swipe at original and absorbing theatre that comes from left field.  Performed by TheatreUpClose, it is playing at the King’s Head Theatre in Islington which is too small for its volume and action so it sometimes comes off as a but frantic and too loud, so sit near the back and have a drink before you start.

‘Once We Lived There’ runs until Saturday April 26th at 7.15pm with a Saturday matinee at 2pm.