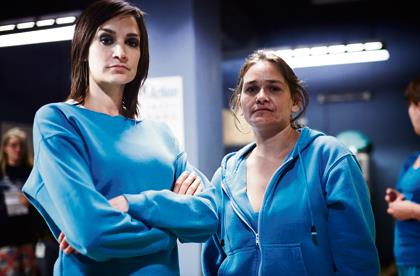 AUSTRALIAN actress Nicole da Silva is used to playing tough characters. Her list of credits includes gritty roles as characters on both sides of law. Her role as a young car thief in Australian drama Dangerous even earned her a Logie nomination for Most Outstanding New Talent. This year has seen da Silva tackle her grittiest role yet, with new Australian television series Wentworth Prison seeing her behind bars and fighting for her life.

Wentworth Prison, which premiered on Australian television earlier this year, is the long-anticipated reimagining of classic Australian television series Prisoner, a program that ran for seven years and 692 episodes between 1979 and 1986. The series followed the lives of a group of women imprisoned in the fictional Wentworth Detention Centre.

Given the international success of the original Prisoner series, anticipation was high when a reimagining of the series was announced, with many critics debating whether the 2013 incarnation would live up to the high standard set by the original series. da Silva told Australian Times that the cast and crew of Wentworth Prison were forced to wait until the program aired before knowing whether or not they had succeeded in living up to audience expectations.

da Silva said: “There was huge pressure on us to get it right, and we didn’t really know during filming if we had found the right balance between the reimagining and the original. It came down to the line. Once it was on television and people were responding the way they were we exhaled.”

The audience response to Wentworth Prison after it premiered in Australia was overwhelmingly positive, with critics calling it one of the best Australian dramas in recent memory. da Silva’s portrayal of alpha dog inmate Franky Doyle has attracted particular acclaim, with reviews calling her a breakout character.

da Silva told Australian Times: “Franky is a top dog, she is complex and pretty sassy. What is great is that the power dynamic shifts between Franky and Jacs (played by Kris McQuade) and later, Bea (played by Danielle Cormack). Audiences in general are crying out for strong female characters on television, then someone like Franky comes and fits that role. She is also really in tune with her sexuality and willing to exercise that to gain power.”

In somewhat of a departure from the original Prisoner series, Wentworth Prison focuses on the gritty aspects of life in prison including violence and sexual relationships. da Silva’s character is involved in one of the more unique sexual relationships of the series: as the series progresses, Franky’s interactions with prison administrator Erica Davidson (played by Leeanna Walsman) grow more and more sexually charged.

da Silva told Australian Times: “As English audiences get to know Franky, they will see that she is operating from a position of control and trying to control people (like Erica). If her sexuality comes into play so be it and that is what is tantalising about the character.”

Wentworth Prison does not hold back in its portrayal of prison violence, with the feud between da Silva’s character and prison heavy-weight Jacs often erupting in disconcertingly realistic displays of aggression. da Silva told Australian Times that she found it hard at times to leave the character of Franky behind when the cameras stopped rolling.

da Silva said: “Physically it wasn’t difficult. I got to do stunt sequences and I relish that part of the job. Psychologically, when you tap into that type of character you’re really accessing a part of yourself that you don’t get to exercise every day. I was pretty lucky that I was leaving Australia straight after filming, because the physical distance helped me get out of that character a lot.”

Due to its setting in a women’s prison, the cast of Wentworth Prison is primarily female and is made up of both established performers and rising stars in the Australian entertainment industry. da Silva said that the cast were not particularly aware of the high number of females on the show during filming, however acknowledged the impact on audiences.

da Silva said: “When I go into work — and some of the others said this also — you’re not acutely aware that you’re amongst females. You’re just professionals doing your job, so I don’t think it impacted on us on set. What it has impacted on is how audiences view television and how they recalibrate what they are looking to see. Isn’t it a shame that it has taken thirty years for another television show with such a heavily female cast?”

The success of Wentworth Prison’s first season led to a second season being commissioned for next year before the season finale aired on Australian television in July. Between shooting, da Silva travelled to Paris to act in a French-Australian film called Drama directed by Sophie Matheson.

da Silva said: “Season two rolled around sooner than we expected, but in between now and season two I will shoot off to Paris to shoot a film called Drama. It is a completely different role from Franky, very delicate and feminine.”

Wentworth Prison’s first season will premiere in the United Kingdom on 28 August on Channel 5. It will consist of ten hour-long episodes, and will screen at 10pm.