EastEnd Cabaret have returned to London after a very successful tour Down Under, bringing with them their raunchy, and often shocking, style of entertainment. BIANCA SOLDANI caught up with the Melbourne misfits to discuss their unique brand of comedy and their promiscuous residency at a specially commissioned Speigeltent. THAT daring Aussie duo, EastEnd Cabaret, have returned to London after a very successful tour Down Under (no pun intended), bringing with them their raunchy, and often shocking, style of entertainment. BIANCA SOLDANI caught up with the Melbourne misfits to discuss their unique brand of comedy and their promiscuous residency at Wonderground’s specially commissioned Speigeltent. 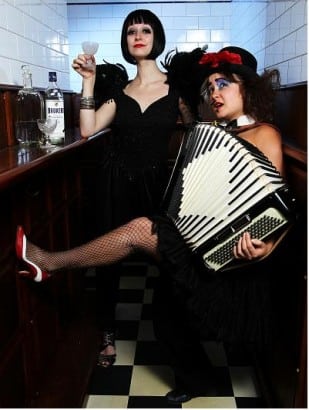 Victy, blinded by a passionate yearning for the lovely Bernadette and bearing the scars of a difficult adolescence — during which half her body developed some distinctly masculine features — finds comfort in the Cabaret’s welcoming audiences.

“Luckily, most people are willing to embrace me (sometimes literally) for who I am. In fact, many people seem to find my half-and-halfness pretty attractive!”

Apart from the occasional wildly infatuated fan, it would seem the greatest challenge facing communist hermaphrodites in today’s society is clothing.

“As a bilateral hermaphrodite (my right side is male, my left is female), I usually have to buy two outfits, and try to stick them together somehow. This involves a lot of needle-pricked fingers and heartache. And safety pins, when I get lazy.”

Coping with the difficulties commonly attached to a gender confused body, Victy spent a good deal of her adolescence buried in numerous readings of Marx and Engels.

“As a budding teenager, dealing with some very unique physical changes (and obsessing over Bernadette, my one true love and soul mate) my communist readings taught me that everybody is equal, despite first appearances.

“But after hiding out in my room for days on end, I realised that Engels had also said that ‘an ounce of action is worth a ton of theory’. So I left my room, and chased Bernadette to Europe. So, this is the mantra that everybody should remember – no matter how freakish you might think you are. We need to stop hiding away in garrets, lusting after cabaret divas — it’s time to take action!”

And so she prepared to leave Australia in search of her lost love. Meanwhile, on the other side of the globe, the lusted after diva in question was busy selling her skills in the dirty taverns and darkened alleys of Paris.

“Victy and I have known each other since we were children, and I have been trying to get rid of her for years. I did manage it for a while, when I was travelling Europe with my ukulele. In the end, I did get tired of playing only the same five songs (my ukulele skills are somewhat limited) and decided I needed an accompanist. Victy would always do anything for me.” 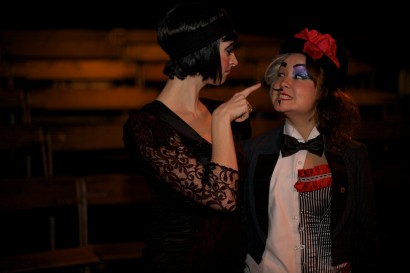 Once reunited, the couple moved to London and made the East End their home, exploiting the fact a lover of Bernadette’s left his bed-sit “unaccompanied”, and they have been performing their dark and slightly bizarre brand of Cabaret, ever since.

Throughout their shows, the duo have exhibited a particular talent for corrupting the meaning of popular songs. Having performed dirty covers of singles from Radiohead, Britney Spears, John Lennon and Jimmy Barnes, I couldn’t help but ask where they draw inspiration for their colourful songs.

“We are inspired by life, darling.” Bernadette answered with charm.

“We write about funny things that happen to us, or our closest friends. The things that people won’t talk about until they’ve had one too many gins.”

But with dirtier and more explicitly sexual lyrics wheedling their way into contemporary pop music, the pair are having to change their tact.

“You are right darling, contemporary pop is dirty enough. At the moment we are writing more and more original songs – crazy things just keep happening to us!”

But after a run-in with the ‘queen of crazy’, Bernadette is having to keep a low profile. She is no longer on speaking terms with Lady Gaga after she chose her own Victy above the pop rock princess as her accomplice for the EastEnd show.

“Of course there are some tensions, but I know that I made the right choice. Victy plays a much more extensive range of instruments – accordion, violin, piano, musical saw, the kazoo… and also doesn’t arrive for performances dressed entirely in meat. Victy is just much better for the show, but don’t tell her I said that.” 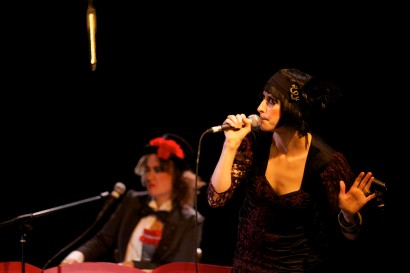 In their recent tour Down Under, the pair very much enjoyed corrupting the innocence of their Australian audiences.

“Australia was absolutely delightful; perhaps a little more conservative than London at first, but there’s nothing that a song about ping pong ball shenanigans won’t fix.”

“We recruited many wonderful Aussies to our Half-Moustache Army in Adelaide and Melbourne — as you’ll agree, a half-moustache is a distinguished addition to any outfit or occasion.”

But despite the various delights involved in taking their raunchy cabaret act to Oz, the comedy duo are glad to be back in London.

“London is our home, and audiences here are fabulously louche and open to anything from danger-wanking to the phenomenon of camel-toe. We are very excited about our upcoming shows at the London Wonderground on the Southbank,”

Victy adding with gusto, “…and we’ll be handing out more half-moustaches to swell the ranks of the army — join us!”

Bernadette in particular is very much looking forward to their upcoming London shows in the Wonderground’s spectacularly fitted out Spiegeltent.

“I have always wanted to perform in a Spiegeltent, ever since I was a little girl. Victy and I had our first Spiegeltent experience at the Adelaide Fringe Festival this year where we won the ‘Best Cabaret Award’ and were invited to perform with the fabulous ‘La Soiree’. The Priceless London Wonderground is going to be absolutely stunning.”

The pair will be accompanied in the Spiegeltent by their Mao inspired sexual activist, Mr Little Red Book, who makes frequent appearances on their shows as he attempts to bring about a sexual revolution.

“Mr Little Red Book belonged to Bernadette’s father. He had seemingly used this copy of Mao’s handbook as a hiding place for some slightly… sexier reading materials, including a well-thumbed pamphlet on various deviant behaviours. An excellent influence —since Mr Little Red Book was transformed into a small hand puppet, he has advocated and educated our audiences on sexual practices such as the Fidel Fruit Bowl and the Trotsky Tickle. His methods are the way forward into the sexual revolution — you have nothing to lose but your chains (and your innocence)!”

Back in London for only three shows, the EastEnd Cabaret promises to “shock, arouse and enlighten”.

Don’t miss them at the London Wonderground on the Southbank on 24 May, 22 June & 26 July. For more information visit EastEndCabaret.com