REVIEW | The iconic 90’s pop song Ice, Ice Baby was the last song I expected to hear when I turned out to see Architecture in Helsinki perform in London on Tuesday. 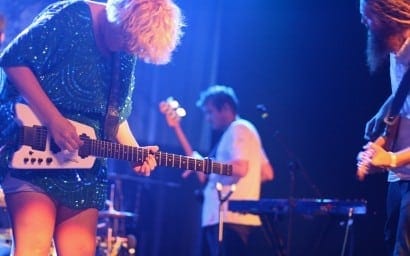 THE iconic 90’s pop song ‘Ice, Ice Baby’ was the last song I expected to hear when I turned out to see Architecture in Helsinki perform in London on Sunday.

But as a long-time fan of these high-energy, Aussie syntho popstars I should’ve known better.

This band is anything but conventional.

When faced with a power cut about 45 minutes into their set, there was little sign of stress or concern.

Instead, the band took the chance to get a little creative, while the backstage crew at Heaven addressed the issue.

While cries for Cold Chisel’s ‘Khe Sanh’ and a request for The Smiths were quickly shot down, a keyboard rendition of Vanilla Ice’s ‘Ice, Ice Baby’ got the crowd smiling and bopping once more.

With the technical hitch not yet resolved, there was enough time for another borrowed tune, this time in the shape of 70’s hit ‘It’s a Living Thing’ by the Electric Light Orchestra.

After about 10 minutes of downtime AiH’s leading lady Kellie Sutherland took the microphone, quickly said “Sorry to break up the party”,  and within seconds the band had slid effortlessly back into their set.

The Melbourne-based ensemble, who have in one form or another been making sugary-sweet pop songs for more than 10 years, were in London to promote their latest album, Moment Bends.

The catchy tune ‘Escapee’, which features in the football video game FIFA 12, was clearly the crowd’s pick of their new stuff.

But, naturally, it was their old favourites, including ‘That Beep’ and ‘Like it or Not’, that really got the crowd jumping.

With the band ditching their instruments for a retro disco-style dance routine in the middle of ‘That Beep’, and lyrics like “dressed up like bubblegum I’m stuck to your shoe let’s run”, standing still for this gig was simply not an option.

The eclectic neon sound of keyboards, drums, synthesisers, slide guitars and everything else in between is contagious.

As the band left the stage, it was clear the fans were not quite satisfied.

The early days tune ‘Heart it Races’ was the only thing left to play.  The fans were clearly not leaving until it was done.

As expected, Architecture in Helsinki didn’t disappoint, with Bird, Sutherland and their party crew putting a synthesised twist on the old favourite to cap off what was one hell of a party.