Arrrrrrgh, me hearties: Walk the plank to the International Pirate Festival

The International Pirate Festival in Brixham offers the perfect escape — a weekend in Devon and the opportunity to dress up as a swashbuckling buccaneer. 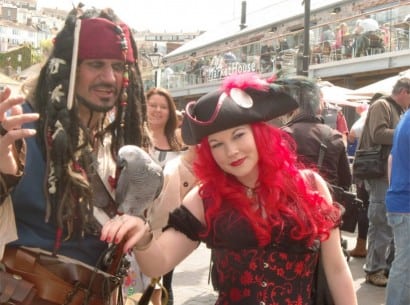 THE concept that all Australians are descended from convict stock appears well entrenched in the consciousness of Europeans, particularly the English.

The role of a non-convict Australian on the organizing committee of an International Pirate Festival in Brixham may therefore seem a little odd, as the Festival’s media communications advisor Richard John concedes.

But, like many convicts, he says pirates were mostly refugees from justice; truants from the armed forces; and just plain gold diggers, dreaming of fortunes in far-flung lands. In fact very few ever made their fortunes, dying in squalor and poverty — much as when they became pirates in the first place. Some pirates may well have hove to among those wretches who found themselves trudging ashore in the empty spaces of what was declared Terra Nullius.

After nearly 40 years in Australia, Richard now works with his wife in their international crafts and gift shop near the harbor in the South Devon port of Brixham. As the birth place of the International Pirate Festival, the town is busy preparing for its fifth Festival on 4-5 May.

Brixham is one of the few working fishing ports left in the UK. Situated south of Torquay in South Devon, it was the port in which the first trawlers were developed that enabled fishing further out to sea, and more sizable and profitable catches. Much of each catch went from Brixham to London and other major cities. It became quite a wealthy port and certainly had a genuine reputation for its fish, and also the courage of its fishermen.  Today it is very much smaller but still has a sizable fishing fleet.

Brixham was a haven for smugglers and pirates. The cliffs here contain many old caves and tunnels (no longer usable) and the narrow, steep streets and alleys were once the route for smugglers escaping the excise men. William of Orange (soon to be King Billy) first stepped on British soil from his home in Holland here in Brixham on his way to London to claim the throne. The ship carrying the then prisoner, Napoleon, on its way to Elba, anchored in Torbay.

The International Pirate Festival therefore has special significance for the port, and is a major community driven event. This year Brixham will resound to loud doses of raucous “aarrring”, music and laughter, as cultural activities and events take place across town and the streets fill with songs of the sea, old folk songs and country music.

Other activities include very energetic reenactments by pirates from the Isle of Wight, and the group, The Queens Rangers based on the scarlet coated Marines of the day.

The full-size replica of Francis Drake’s ship, the Golden Hind, in the harbor as a fixture, will feature as a platform for piratical demonstration of gunfire and swordplay, and cannon firing. Captain Jack Sparrow also appears to make an entry as his facsimile swears blind that he too met Keith Richards.

At attempt to form a conga line of pirates that will snake around the town for over a mile is one of the key events, and will be followed by a performance on the Sunday from Tom Mason and his Blue Buccaneers from Nashville, Tennessee.

To see a very sizable part of the Brixham population dressed up in pirate fancy dress for two days is extraordinary says Richard.

“The interpretations of clothing seen only in historical etchings and sketches is remarkable,” he tells Australian Times.

It is true, apparently that Captains Morgan, Tench and other famous pirates dressed in an exaggerated manner to ape the cultures from which they came. Brixham has so many captains, one can only guess at the size of pirate fleets. From the simpler to the similarly sumptuous their female partners (wenches or doxies) equally look the part.

Make a weekend of it and take in the sights of the Devon area.