Documentary film Alias Ruby Blade offers a unique insight into the tumultuous birth of a new nation in Timor-Leste through the story of Kirsty Sword, a young Australian activist who provided valuable assistance to the resistance and ultimately fell in love with resistance leader, and first President of Timor-Leste, Xanana Gusmao.

by Kristy Barratt
in Lifestyle 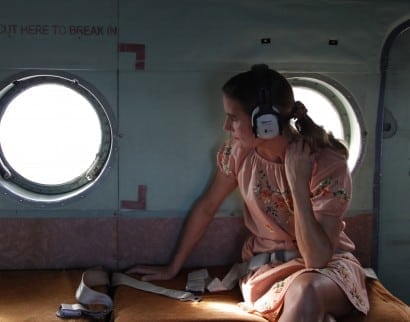 THE YEAR is 1990. A 23-year-old Australian woman from Melbourne embarks on a brave journey to East Timor, a remote area in the Far East. The country has recently opened up to tourism following years of isolation from the outside world. With her video camera in hand, aspiring filmmaker Kirsty Sword begins to document her “holiday” to this war-torn country.

Fast-forward to today and Kirsty’s original footage from 1990 onwards makes up parts of the raw and evocative documentary, Alias Ruby Blade, which had its UK premiere last week at the Human Rights Watch Film Festival.

Australian Times met the filmmakers, husband-and-wife team Alex and Tanya Meillier, on the second night of the film screening to get an insight into the making of this remarkable documentary.

“We wanted to create this film in a way that it’s accessible to everyone — even if they don’t know the story of what happened in East Timor,” says director Alex.

“In editing the film, we gravitated towards the most intimate footage we could find. Our goal was to keep the audience in the moment as much as possible.”

And it works. From the moment the film begins, I am totally captivated. The scenes are unrefined and compelling, the music powerful, and the story deeply moving. It’s not until the film ends 80 minutes later that I stop to take a breath and wipe away the wet tears that have been streaming down my face.

Alias Ruby Blade follows the story of passionate human rights activist Kirsty Sword. After her first visit to East Timor, Sword takes up a job as a researcher for a groundbreaking English documentary film, which sets out to record the struggle for independence in East Timor.

Determined to help the Timorese people and get closer to the action, Sword moves to Jakarta, Indonesia, where she works as a human rights campaigner. It’s here that she puts her filmmaking dreams on hold to become a spy for the Timorese resistance to Indonesian rule.

Operating as an undercover agent with the pseudonym Ruby Blade, Sword plays a key role in smuggling video equipment and cassettes to the resistance’s prison-bound leader, Xanana GusmÃ£o. Through intimate correspondence in the form of letters and photographs, the pair fall in love.

Their actions along with those of other important Timorese political figures pave the way for the 1999 referendum in East Timor, of which 78 per cent of Timorese voted in favour of independence. This scene in Alias Ruby Blade is one of the most powerful pieces of footage I’ve ever witnessed.

“In the film, when the Timorese people go to vote, they take their pots, pans, rice and blankets,” says Alex.

“They know that afterwards, there will be a terrible retribution and their villages will be burnt to the ground. It’s an inspirational scene and a big part of what drew us in. It shows the courage, resilience and individual acts of bravery of the Timorese, and that’s what we want this film to show.”

If you don’t know much about East Timor, or want to learn more, Alias Ruby Blade is the film to see.

Alias Ruby Blade will tour for the Tribeca Film Festival, from April 17-28, before making its Australian premiere in Melbourne.