Age will not weary her: Judith Lucy at Soho Theatre 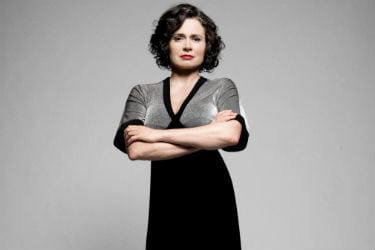 JUDITH Lucy opened her routine at Soho Theatre by saying that the last time she did a show in London she received rave reviews for her performance. The reviewer, she claimed, had compared her to a “young Michelle Pfeiffer… if a tree had fallen on her”.

If that reviewer was correct, then the tree did not do all that much damage to Lucy’s sense of comedy, because years later and her dry wit has only gone from strength to strength.

The passage of time is a major theme of Judith Lucy’s Nothing Fancy, showing at Soho Theatre until 1 December. In fact, Lucy’s routine can basically be whittled down to three concepts: age, spirituality and… well, the female anatomy.

Throughout the show, Lucy asks many of life’s most prominent unanswered questions: When is it okay to start acting like an ‘old person’? Why do young people feel the distinct urge to remove hair from all parts of their body? Why can males talk about their p*nis for half an hour and be considered a genius, while it is disgusting for women to do the same when it comes to their private parts?

If it is socially unacceptable for a woman to publically speak about her genitalia, Lucy does her very best to level out the playing field. Early in the performance Lucy describes her first experience with a ‘Vegas wax’, which she suggests is called that because combining hot wax with genitals is always a bit of a gamble.

Funnily enough, it was the men in the audience that seemed to get the biggest laugh out of all of this talk of waxing and female genitalia. It goes to show the universal appeal of Lucy’s laconic Australian humour.

Aside from all the discussion of women’s bits, Lucy ruminates on the process of aging and the individual’s inevitable attempts to ‘find themselves’. Last year’s ABC Television program Judith Lucy’s Spiritual Journey provided Lucy with significant material for her most recent routine, with tales of Buddhists that tried to set themselves on fire and Byron Bay hippies that compared her soul to that of Bruce Lee and Jackie Chan.

Lucy has a reputation for being quite self-deprecating in her routines, and she does not disappoint in Nothing Fancy. At one point she describes her time in a silent retreat, unable to speak or communicate with others for ten days. At the end of her ten days of isolation, a German woman approached her and asked what she did for a living.

When Lucy told her that she was a comedian, the German woman was shocked and said that she had been observing her for two day and had decided Lucy must have been either a grave digger or an egg farmer. Lucy is nonplussed in telling these stories; however it is clear that they provide considerable fodder for her comedic performances.

Lucy briefly touches on her family life, a subject which became one of Australia’s most prominent adoption stories with the release of The Lucy Family Alphabet in 2008. She found out that she was adopted when she was twenty-five years old, on Christmas Day. Lucy highlights the awkwardness of that situation in singing “jingle all the way, we’re not your real family, you’re real mother gave you away”.

“Try writing that joke when you’re just starting out,” she tells the crowd, who have broken down in hysterics by this point.

Judith Lucy has been a part of Australia’s comedy elite for decades. For all of her jokes about not being recognised as a celebrity, Lucy is an entertainment icon in Australia and drew a big audience to her show at Soho Theatre. As she points out, there is something quintessentially Australian to go to the other side of the world … just to see an Australian comedian perform.

Lucy’s Nothing Fancy is irreverent, awkward and completely hilarious. She brings the best qualities of Australian comedy in her dry delivery and no frills approach to observational humour. Lucy is a welcome reminder of what makes Australians so funny with her uniquely sardonic manner. The show is titled Nothing Fancy and it truly doesn’t need to be anything fancy: it is perfect as it is.

Nothing Fancy is showing at Soho Theatre until 1 December.