When PAUL JUDGE spoke to funnyman Adam Hills recently, the Aussie comedian was in a London backyard kicking a football with his 13 month year old daughter after having spent all morning reading through a script for Spicks and Specks. 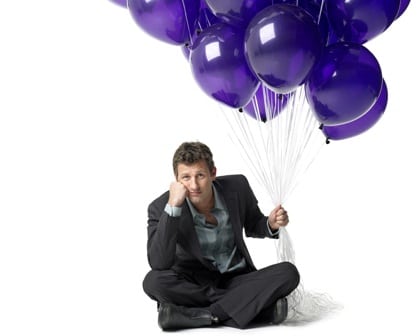 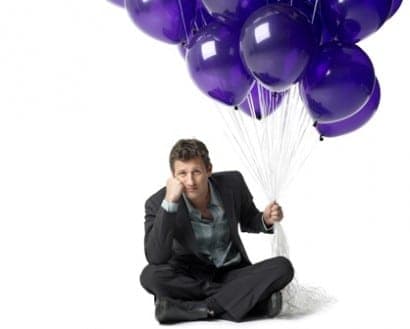 When PAUL JUDGE spoke to funnyman Adam Hills recently, the Aussie comedian was in a London backyard kicking a football with his 13 month year old daughter after having spent all morning reading through a script for Spicks and Specks.

It’s been a very busy period for Adam Hills. And while it may not seem it, a morning of soccer and script reading is actually of vital importance for one of Australia’s most respected comics. The script is for the upcoming Australian national Spicks and Specks farewell tour. After seven years, the popular music quiz show which Adam hosts will be calling it a day, screening it’s final episode and heading out on the road to farewell the fans. The second activity – kicking a football around with his daughter will help when he appears on the UK Saturday morning ritual ‘Soccer AM.’ He wasn’t aware the TV show also required some athletic skills.

‘‘Really? Well lucky I’m here practicing! My daughter has an obsession with kicking soccer balls, although I probably shouldn’t call it soccer. I support Liverpool but have been asked to stop from a friend as apparently I’m bad luck,’’ Hills jokes.

He’s here in the UK with his stand-up show ‘Mess Around’ which he has been touring for the past four weeks. But he explains the show is not your standard comic routine.

‘‘There’s no set formula. Every show I take stories from the audience and work it into my routine. Last night’s show in Swindon, a lady received a text message from a friend about their kid’s spelling homework. I texted her back with a list of explicit words and challenged her to put them in a sentence. At the end of the show she messaged back a response. It was the world’s longest heckle but worked.’’

For a man who spends each year straddling the globe, with almost as much time in the UK as at home, does he enjoy the British audiences compared to Australian ones? According to Hills, the Poms are very switched on to comedy and have great potential for his spontaneous type of show.

‘‘UK audiences know the rules of comedy shows, there’s so much of it over here and they know what to expect. It’s a bit confusing for them when I come in and throw all the rules out. Plus the English are typically reserved but underneath they’ve got really funny stories and interesting lives. They just don’t think they’re funny but there’s a real joy in discovering their unassuming hidden backgrounds. Australian audiences are willing to tell you anything and everyone thinks they’re funny!’’

Already a hugely successful performer and cream of the Aussie comedy crop, there’s another reason why 2011 has turned into such good year for Adam Hills. He’s been nominated for an ARIA award in the best comedy release category for his new DVD Inflatable. Add this to the four Logie awards he’s already won including the Gold Logie for Best Television Personality in 2007 and it’s an impressive trophy cabinet. He’s thrilled with the ARIA nomination as comic DVDs are the new comedy albums according to him.

‘‘Years ago a comedian would release an album of their routines. Nowadays people don’t buy these albums to listen to and the DVD is the way for people to watch our work.’’

What of this special script he’s been reading for the Spicks and Specks farewell tour?

‘‘It’s the farewell tour and the second time we’ve done it live so we need to make it special. It’s going to be a bit like a high school Rock Eisteddfod, with costume changes and we’ll be dragging audience members on stage.

‘‘Put it this way, we’ve got a dance choreographer for the show,” he adds proudly.

The show, which attracts 1.3 million viewers an episode, has had a great run according to Hills.

‘‘We realised it was time to finish up. The saddest part will be not seeing Myf and Alan (Warhurst and Brough, team captains for the show) regularly who have become great friends.’’

He readily admits his music knowledge hasn’t increased despite the show but he’s not fazed.

‘‘There’s a reason why I host it! It’s great at parties if I get challenged on music, I just text Myf or Alan and they usually have the answer.’’

He won’t be stuck for things to do when it’s over, with his own chat show Gordon Street Tonight commissioned by the ABC for another series after 2011’s triumphant first series. He rated the variety of guests as the reason for its success.

‘‘We had a mix of celebrities and everyday people. One of the most popular shows was when we had World War Two veterans who had fought in the battle of Tobruk. Viewers loved it and I think it’s because they had such interesting stories to tell.”

Similar to his stand-up show, Adam Hills is able to find an interesting story behind seemingly normal people. It’s only fitting because despite his immense popularity he’s just a very normal kind of guy too. One with a wicked sense of humour.

Adam’s DVD ‘Inflatable’ is out now.