AC/DC make official statement about health of Malcolm Young in response to split speculation while singer insists the band will keep playing. 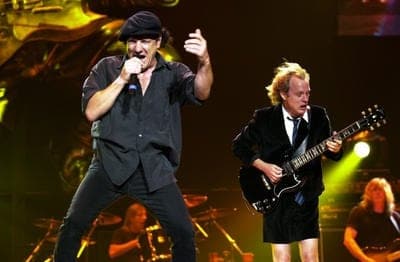 AC/DC say they will play on, despite the grave health of rhythm guitarist Malcolm Young.

The legendary hard rock band posted a statement on their Facebook page today, in response to the rumours that they were set to quit.

“After forty years of life dedicated to AC/DC, guitarist and founding member Malcolm Young is taking a break from the band due to ill health. Malcolm would like to thank the group’s diehard legions of fans worldwide for their never-ending love and support. In light of this news, AC/DC asks that Malcolm and his family’s privacy be respected during this time. The band will continue to make music.”

Rumours have been swirling in the media over that past 48 hours that AC/DC were imminently to retire due to the health of founding member, Malcolm.

In an interview with Australia’s ABC radio on Wednesday, close friend Mark Gable confirmed the AC/DC guitarist was indeed ill and would likely not be able to continue with the band.

“That is true, Malcolm is sick,” Gable said.

“From what I understand, and it’s even been confirmed in part by his son Ross (Young), that it would appear Malcolm is unable to perform anymore.

“It’s not just that he is unwell, it’s that it is quite serious. It will constitute that he definitely won’t be able to perform live.

“He will probably not be able to record.”

This followed reports on Tuesday that the band were about to announce their retirement.

However, AC/DC singer Brian Johnson has since insisted that the rumours of a split are untrue and the band are set to gather next month to play and possibly record.

“We are definitely getting together in May in Vancouver,” he told Britain’s The Telegraph in an article published earlier today. “We’re going to pick up some guitars, have a plonk, and see if anybody has got any tunes or ideas. If anything happens, we’ll record it.”

According to blogger Daryl Mason of The Ostrahyun Malcolm Young has suffered a stroke and it’s complications are the reason for him having to withdraw from the band.

“More than a month ago … Young had a stroke, which left a blood clot on his brain,” he writes.

“When AC/DC reunited at the start of April to begin a month of rehearsals, in the lead-up to new album recording sessions, Malcolm discovered he couldn’t play. At least, he couldn’t play like he used to play.

“Nothing has been officially confirmed, as of this writing, but friends and family members have been discussing what happened to Malcolm for the past couple of weeks. The blood clot, resulting from the stroke, is believed to be why Malcolm couldn’t keep working.”