Five of Australia’s most talented Aboriginal and Torres Strait islander creative practitioners have arrived in the UK to take part in the British Council’s annual ACCELERATE programme. High Commissioner Mike Rann welcomed them at a special event at the BT Tower. 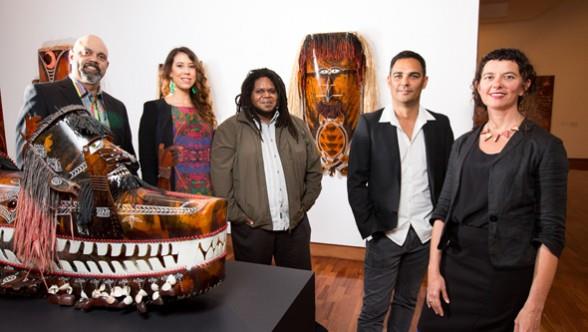 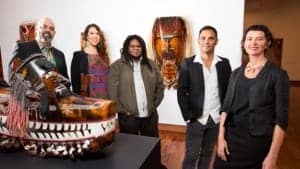 BT Australasia and the British Council hosted a special event on Wednesday eventing. On the 34th floor of the BT Tower, High Commissioner Mike Rann welcomed five Indigenous Australian creative practitioners, who travelled to the UK as part of the British Council’s annual ACCELERATE programme.

With 360-degree views of London, guests were in awe of the cityscape at this height. It was a perfect setting to celebrate such an important cultural initiative.

ACCLERATE is a leadership programme for Aboriginal and Torres Strait islander artists, and arts managers. It’s an intensive fully funded opportunity involving leadership development, industry placements and mentorships in the UK and Australia.

Now in it’s fourth year, ACCELERATE is a very powerful arts tool, as it continues to expand the career horizons and personal development of its recipients. However, the benefits of the programme also extend to the UK arts and cultural fields.

“It’s about refreshing the dialogue in both ways,” Ms Freeman said. “It’s allows us to promote the endemic and diverse arts scene in the UK. But critically it allows the UK to engage meaningfully with Aboriginal and Torres Strait islander arts.”

“Through their work as Indigenous cultural leaders, they are keeping the vibrancy and diversity of those cultures alive. And through their leadership and creativity they are also injecting new energies into their sectors.

“The breadth and depth of talent throughout Australian Indigenous communities is reflected by this year’s group,” Mr Rann said.

The High Commissioner also recognised the great year it had been for UK/Australia artistic exchange, with the Australia exhibition at the Royal Academy of Arts, the Origins Festival, and the soon be staged Namatjira project at the Southbank Centre. ACCELERATE will provide yet another valuable opportunity for the UK to engage with Indigenous Australia.

“Set up by the British Council, it’s an acknowledgement that dialogue between the British cultural sector and indigenous Australian peers, is an imperative contributor to the contemporary UK Australia relationship,” Mr Rann says.

One of the major supporters of ACCELERATE is BT Australasia.

Managing Director Simon Gatward, who spoke at the event said: “One of the reasons we’re proud to be involved in this program is we were actually able to offer services which provided the opportunity to link communities together.”

Andrea James, who is one of the recipients, is an Aboriginal theatre maker driven by the expression and advancement of Aboriginal stories and culture through performance. She is also creative producer at Carriage Works in Sydney, promoting and developing contemporary Aboriginal arts in Australia.

“ACCELERATE will give me the opportunity to explore London and Wales rich and longstanding theatre traditions, to visit sacred theatre sites, and to have exciting, creative cultural exchanges with theatre makers and cultural producers at the top of their game,” Ms James said.

“I believe ACCELERATE is a vehicle to explore ideas and ambition in our personal practice. But also have the opportunity to be supported in, and challenged to discover more about our leadership potential.”

As part ACCELERATE, Ms Moulton will be visiting Pitt Rivers, a museum in Oxford and the British Museum.

“I’m interested in exploring my ideas around the role of Aboriginal and Torres Strait islander material in these institutions and how engaging contemporary indigenous artists in this space can re-contextualise the narrative attached to the historical objects they hold in trust,” she said.

Ron Bradfield Jnr will be travelling throughout the UK exploring the ways in which people culturally anchor themselves, and their sense of place.

Solomon Booth is using ACCELERATE to enhance his career as a visual artist, and to explore business governance in the international arts sector.

And visual artist Michael Cook, is looking at making deeper connections for Australian visual art in the UK.