REVIEW | We sat there staring into the storyteller’s shaded, deep set eyes as he spun uncomplicated yet incredibly moving yarns through his impressive song writing, all the while backing it up with a voice that is as solid, seemingly unchanging and Australian as Uluru.

by Joshua Lloyd
in Lifestyle 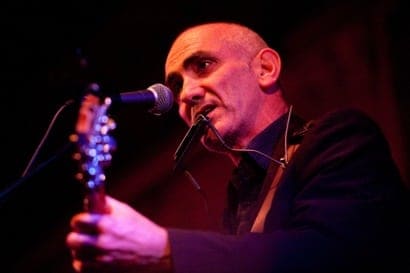 The phrase ‘Australian culture’ is, to the Poms, an oxymoron. Seeing one of our greatest cultural icons of all time would surely change their minds.

Paul Kelly played Bush Hall over four nights, going through his back catalogue A-Z. We were there for the run home, songs S-Z.

So firstly his hits. To Her Door had nearly everyone singing along loudly; extra emphasis put on the line not said on the radio-friendly version — ‘she said shove it Jack I’m walkin’ out the f**ken door’.

Sweet Guy’s chorus erupted into another singalong as did Winter coat which was, so the great man said, about being in love in London.

When I first met your ma was tougher with the crowd torn between belting it out in the small room and drowning out Kelly’s amazing voice or sitting in stunned silence at the song’s simple beauty. The happiest of mediums was met.

But it was some of his lesser known songs that had the crowd stunned.

We sat there staring into the storyteller’s shaded, deep set eyes as he spun uncomplicated yet incredibly moving yarns through his impressive song writing, all the while backing it up with a voice that is as solid, seemingly unchanging and Australian as Uluru. The man is an utter enigmatic genius.

I dare say that, like mine, barely a throat was without a lump when he sang Sydney from a 747, speaking about seeing the red roofs of Sydney suburbs from the plane. A song perfectly aimed at the largely expat audience.

While I would have been stoked to hear some of his other hits (those already gone through on previous nights) it was a bloody brilliant gig.

An extra treat was had too in extremely talented nephew Dan Kelly singing his cleverly kooky Bindi Irwin Apocalypse Jam.

Paul Kelly is deserving of every accolade given to him. He is the closest we’ve ever had to Bob Dylan. No such thing as Australian culture?… Pig’s Arse!

Did you go to Paul Kelly’s gigs in London? Check out the photos or read the reviews below: