REVIEW: Despite being filled with some of Paul Kelly’s lesser known songs, the “dark, weird and difficult night three” as described by Kelly himself was not without highlights. 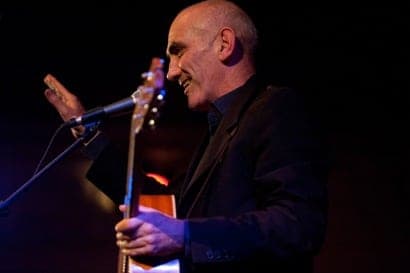 Despite being filled with some of Paul Kelly’s lesser known songs, the “dark, weird and difficult night three” as described by Kelly himself was not without highlights.

Opening the show with “Love Never Runs On Time”, Kelly immediately got the crowd on side with what would turn out to be the most well known of the night three songs.

The crowd were treated to a family event with Paul performing most of his songs during the evening with his superbly talented nephew Dan Kelly. A pleasant surprise was when Paul allowed his vocal ability to step out from behind his musicianship performing “Meet Me In The Middle Of The Air” a cappella.

The performance of the Paul Kelly and the Messengers classic “No You” allowed Dan Kelly to illustrate what he adds to these performances as he breathed new life into his uncle’s classic with progressive guitar licks and more than capable harmonies.

The second half of the show saw Kelly provide greater detail and background to many of the songs he played; perhaps sensing the disappointment of the crowd that they wouldn’t be hearing any of Kelly’s better known songs.

The highlight of the performance came late in the night as the crowd became part of the band, responsible for the whistling section of the chorus for “Shane Warne”. Kelly’s ability to capture everything about Australia and it’s icons in his songs was never better represented than during the ode to the country’s greatest spin bowler.

Overall, night three of the A-Z shows is probably best viewed as a learning experience. A night that allowed Kelly to perform some of his lesser known back catalogue and give the audience a taste of the songs that didn’t reach the peaks of the charts.