REVIEW: The letter ‘F’ was where we started the night with Paul accompanied by nephew Dan Kelly a famous musician in his own right. 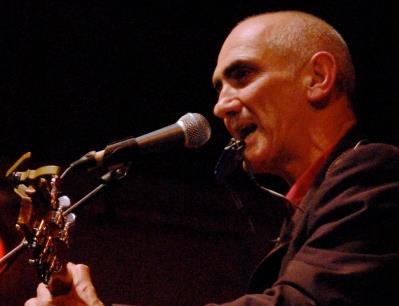 CURSING myself for not getting there early to grab a seat I stood at the back for the 2nd instalment of Paul Kelly’s four night residency at London’s Bush Hall.

Don’t get me wrong, standing at a concert is the norm but these nights are more than a music gig as he tells the stories of many of his songs, so sitting is where you want to be.

The letter ‘F’ was where we started the night with Paul accompanied by nephew Dan Kelly, a famous musician in his own right. The two of them have great stage chemistry, joking and mocking each other throughout the show and a musical partnership which highlights the years they’ve spent playing together.

The night wound down with the letter ‘L.’ Don’t worry, you’re able to keep up; there’s a board that lists the letters and Kelly discards them as we progress.

Included last night were the well-known hits ‘From St Kilda to Kings Cross,’ ‘Lately’ and ‘How to Make Gravy.’ Played alphabetically you also get to enjoy some songs you might not be familiar with; particularly good were ‘I Can’t Be Believe We Were Married’ and ‘I’d Rather Go Blind.’

The real highlight of these shows though is the marrying of the music with the stories behind them. He’s the sort of guy who gets inspiration for a song walking down King Street in Hammersmith (‘Jump to Love’) or about the 1960 Aboriginal stockmen strike (From Big Things Little Things Grow).

A quality performance from a true master. If you’re going for the final two nights, get there early if you want a seat.