After 10 years in London ZÃ¶é Caldwell has got her fingers in many creative pies, taking full advantage of the opportunities London has to offer. In addition to her role as Associate Producer, Zoe also finds time to dabble in music management, comedy and co-found IronBark — a theatre company introducing Australian voices to the UK. 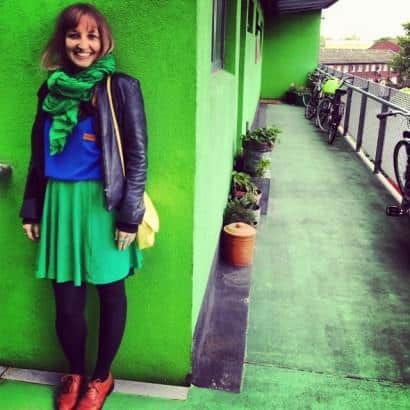 I decided to move to London just six weeks before leaving Australia. I originally travelled to London for a change of scenery. A friend of mine, Lidia, had mentioned she was going to visit relatives in Italy and then explore Europe and I pretty much invited myself along. That was way back in 2003 — making it 10 years on 23 July I’ve been here in the UK.

I am Associate Producer for a theatre production company called Glynis Henderson Productions based in London. We produce, manage and tour various shows in the UK and also internationally. I specifically look after the developing shows – keep an eye out for Tubular Bells ‘For Two’, Action To The Word’s A Clockwork Orange and BLAM!

I also run an Australian theatre company called IronBark, dabble in music management with Aussie folk songstress Amy Firth via Secret Side of the Storm and then there’s my newest venture Good Times Presents, a company I’ve formed with my good friend and fellow Aussie producer Jaqueline Kolek  – we focus on female Aussie comedy. In a nut shell: I’m busy!

I essentially fulfilled my theatre dream at the age of 21 after coming to London — I worked backstage on Phantom of the Opera which still operates as it did when it first opened in 1986. There are hundreds of people backstage pulling ropes and pushing scenery around — it’s fascinating behind the scenes. While I was in that job I managed to somehow convince the Production Manager at Bill Kenwright Ltd (a West End producer) to hire me as his assistant which led to many more career highlights. My most memorable has to be working on All’s Well That Ends Well at the Gielgud Theatre starring Judi Dench – she is my ‘older lady’ crush.

A big difference in the theatre industry between UK and Australia is things are a lot more fast-paced here in comparison. Deals can be made and venues can be booked just a few weeks before opening a show here. Australia is more reliant on subscription based theatre programming so shows are organised at least a year in advance if not more. I’m pretty good at ‘flying by the seat of my pants’ and I enjoy the challenges that come with last minute projects/productions.

What’s up next is the Edinburgh Festival. I am producing two shows with GHP: Tubular Bells ‘For Two’ from Australia and BLAM! from Denmark. I am also presenting a comedy duo from Australia called KelFi & FiKel through Good Times Presents. Back in London, IronBark is working on the Theatre Ashes to premiere here in early 2014 and then hopefully transfer to Sydney later in the year.

I think Australians are drawn to the UK because of the two year working holiday visa. It gives us the opportunity to explore somewhere far away from Australia, and be able to hop over to Europe easily. There seems to be a few different kinds of Aussies coming through the UK — the 18 year-old Contiki tour type, the early 20s finished university/getting over a big heart-break, the late 20s professional couple with a job transfer or the 30 year-old who has grabbed the working holiday visa opportunity at the very last second!

One thing I can say is that the coffee has definitely improved by 100% over the last 10 years thanks to the Aussies and the Kiwis. My typical weekend consists of locating the best untested brunch spot (that usually takes half of Saturday) and coffee, coffee, coffee — I love finding new cafes. My favourites are Lantana, Salvation Jane, Wilton Way Café, Ozone and HER. This is followed by cycling around with the hipsters in the East and then the usual: theatre, pub, friends. Oh, and Columbia Road Flower Market on a Sunday.

I do miss family, friends, the ocean, those familiar sounds and smells and Crunchie Bars — they are so much better in Oz! I am very lucky to be able to travel with work so trips to Europe come up quite regularly. My top UK escapes at the moment are Istanbul, New York and Iceland. I also went on an amazing trip to Morocco with my mum a few years back which I would love to visit again.

Anything is possible in the UK, particularly with the weather. It could easily sunny, snowing, raining, sleeting, sunny again and then snowing again all in one day! All you can do is wear lots of layers in autumn/winter and hold out for those glorious spring/summer days – they are well worth the wait.