London's Portobello Road Market is so much fun to just nosey around in as much as it's a shopper's dream. Oh, and there's a certain romantic movie to fantasise about as well. I’m just a girl, standing in front of a boy, asking him to love her.

Know the quote? Yep, it’s only from the hottest chick-flick of the 90s – Notting Hill. Located in the trendy suburb of Notting Hill and, of course, featured in the movie is the world famous Portobello Road Market.

A couple of friends had just arrived in London from Australia so they joined me as we set off bright and early, emerging from Notting Hill Gate Tube station to make our way down to the street. With signposts to guide the way as soon as you get off the Tube (although it’s not as if we could miss the hordes of other tourists making their way down too), it was an easy 10 minute walk to Portobello Road. One of the best parts about this walk is you get to check out all the swanky houses and if you’re paying attention you can spot a Banksy piece as well as George Orwell’s old house. 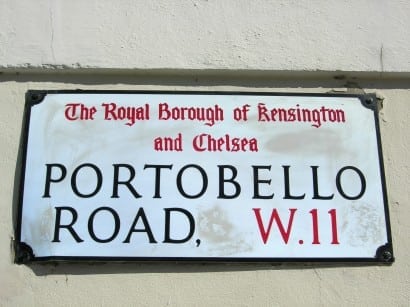 Once you get to the markets, be prepared as there are a lot of sights to take in and the streets are filled with people gazing at the variety of wares on display. Many of the stalls are stationed outside permanent stores so there’s plenty to look at – from antique books and crockery, to knick-knacks, handmade clothing and London souvenirs. There were so many different types of people there – young and old, every size and shape, from locals to tourists – that people watching in itself was one of the highlights of the day.

Already a London institution and tourist Mecca, another reason that Portobello Road is so popular is because of the Hummingbird Bakery and it wasn’t too long after spotting it that we jumped into the line that was out the door and down the street to get one of their delicious and famous cupcakes. Trust me, the red velvet cupcakes are worth waiting for!

After eating our yummy cupcakes we kept wandering down the road, poking our heads into stalls or shops along the way before reaching ‘The Travel Book Shop’, or what was the outside of the shop when that fave movie, Notting Hill, was produced. It’s no longer a book store but we still stopped to get the mandatory photo as so many fans still do.

We continued along the road weaving our way out of the antiques area and into the fresh food stalls that provided not only some of London’s best produce but the perfect excuse to grab some lunch.

At the end of the markets I thought we had hit the jackpot – it was a thrift shoppers dream come true. There were lots of stalls selling pretty decent quality thrift pieces and upon discovering a scarf and tie bargain bin for £1 I went a bit mental. There was also an army surplus stall (note to self for future dress up parties), jewellery stalls, and hundreds of records and books piled high across the tables.

It was easy to see why Portobello Road Market is such a tourist attraction as it provides lots of fun things to look at and see as well as being a shopper’s dream. It’s also handily located near Hyde Park and there are lots of good old traditional English pubs nearby that provide a spot where you can grab a drink and relax after the hustle and bustle of the markets.