Walking the Thames Path in London

BRON IN THE DON | Our London adventurer has found a little piece of home here in London, in the most unexpected of places — the River Thames. So, with the chance to walk the famous waterway and tick off #26 on her London Top 100 list, she set ‘sail’ along the Thames Path. 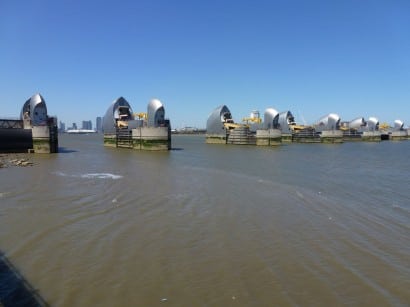 SIMILAR to my hometown of Brissie, the city of London is focused on the river running straight through the centre. Not unlike when I was at home, I often find myself drawn to the river and the city centre to explore the attractions that line the banks, or to just have a peaceful wander along the water (although I must say the River Thames is a lot more picturesque than the Brisbane River).

Winding its way from the Cotswolds Hills via Oxford, Windsor and London to South End Sea, the Thames and the path that snakes along its banks measures 294km. While I do enjoy a walk there is no way I was attempting that massive effort all at once, so luckily for me it is broken up into sections.

Since many of London’s hotspots are focused along the river I realised I had inadvertently done some of the walk without realising. My casual walk from Borough Markets up to Waterloo passing St Pauls, Millennium Bridge, Tate Modern and the London Eye meant I had covered one section easily. 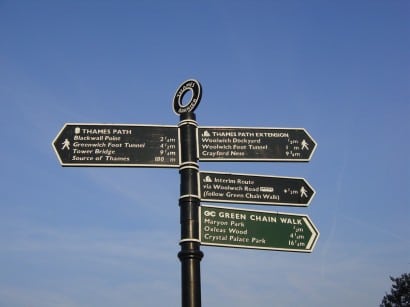 However in the interests of ticking this one off the London Top 100 list properly I decided to venture further afield and get the train to Charlton and take the short walk down to the Thames Barriers. The Thames Barriers are huge metal and concrete gates used to prevent London from flooding during a tidal surge. For £3.50 you can visit the information centre and see how they work. It was pretty nerdy but I really enjoyed seeing how they work and the history of why they were put in place.

From there it is about a 45 minute walk along the path to the O2 Arena at Greenwich and I must admit it wasn’t a particularly thrilling walk. Based alongside London’s eastern industrial areas, there isn’t too much in the way of beautiful scenery to see however we did discover a couple of people fishing and a small rocky beach with some interesting artwork. It also provides a good view to the other side of the river with the towering structures of Canary Wharf. 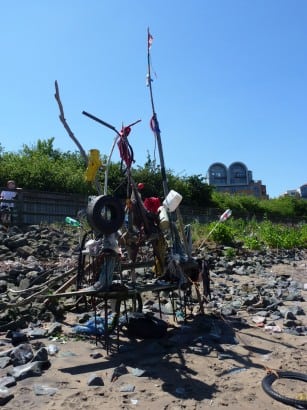 I enjoyed the walk but I would have to say there are more picturesque places to walk. One of my favourite sections is that from Putney to Richmond. With its greenery and wide footpaths there are no shipping containers in sight. Just gorgeous canal boats and cafes lining the walk. You can follow the path of the Oxford to Cambridge boat race and get the chance to veer off to visit the deer in Richmond Park. If you happen to fall into a pub along the way then there are plenty of options with a gorgeous view to choose from.

While I haven’t yet walked the 294km I have spent plenty of time along the Thames sipping ciders in the sun in Kingston or running through Battersea Park. I’m slowly getting there but next time I plan to explore a little further a field and walk a stretch in Windsor or Oxford and I might complete it all one day!

Got a fave part of the Thames Path? Tell us below: