To she pee, or not to she pee, that is the question

GO HARD OR GO HOME: When it comes to festivals, everyone seems to have a different idea about what items are ‘essential’. 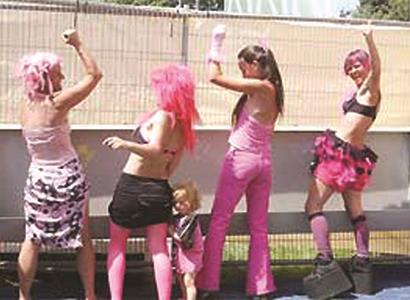 When it comes to festivals, everyone seems to have a different idea about what items are ‘essential’.

For the ladies, what to wear is pretty important — onesie, funky hat, wellies and, should the weather turn nasty a poncho, are all key components of the festival look.

The guys, on the other hand, are more likely to be concerned with the camping gear; the tent, sleeping bags, a sizeable Esky (or ice box or chilly bin, depending on where you’re from).

Meanwhile, sunscreen, loo roll and booze seem to feature at the top of the lists for both genders.

But there’s one item that proves controversial — the she pee.

For those who don’t know, this device comes in various forms but it’s essentially a female urinal that allows women to go standing up.

At best, it means no queuing up for the port-a-loos, which can save you hours over the course of a three-day festival.

At worst, it’s rather disgusting and a little terrifying.

I first heard about the she pee at the Isle of Wight festival in June last year when my camping buddy, who shall remain anonymous, asked me if I’d like one.

She was buying one for herself, and despite her best efforts to convince me of their benefits, I declined.

However, after seeing (not literally) how much time she saved and how many filthy, smelly toilets she avoided, I began to reconsider my decision.

Standing in a queue for long periods while your bladder reaches bursting point is just the beginning.

When it’s finally your turn, the experience gets much worse.

The port-a-loo itself is probably blocked, there’ll definitely be no loo paper and there’s probably no hand sanitizer left either.

But the smell is the worst part — by the end of day one it’s offensive, by day two it’s ghastly, and by day three it’s tear-jerking.

So, with all of that in mind, perhaps using one of these plastic bag or funnel-type devices isn’t such a bad idea.

Sure, there’s the probability of the execution getting, erm, a bit messy.

But it means you avoid the smell and long queues entirely, and if there’s no toilet paper or soap you’ve only got yourself to blame.

Despite the obvious benefits of the she pee, I find myself heading to Latitude Festival without one.

It’s the idea of actually using it that disturbs me — squatting has never really been my thing, and I can’t imagine this being any different.

But come Monday, when the festival toilet experience is fresh in my mind, I’ll probably be ready to overcome the fear.