Tim Tams vs Penguins – is there even a contest?

GO HARD OR GO HOME | After receiving a little package of Aussie goodies from my folks, I thought I'd repay them the favour and send them some treats from the UK, including the dreaded Penguin. 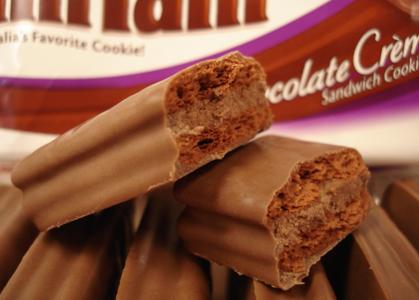 I threw in some Penguin biscuits for a bit of a laugh, with a note explaining that they were the UK’s answer to our beloved Tim Tams.

For those of you who haven’t come across Penguins – they’re similar to Tim Tams but available in fewer flavours and of course, have nothing on the Arnott’s favourites.

So, when my little brother declared that he actually thought the Penguins tasted better than the god of chocolate biscuits that is the Tim Tam, I was shocked. It’s like saying Marmite is better than Vegemite, or that light beer is just as good as full-strength. Sure, they’re similar, but nothing like the real deal.

If it were a Brit who had made the declaration, it would have been more understandable, but for my own flesh and blood to make such a bold statement was just insane.

Don’t worry, I put him in his place, and soon got over the shame.

But it got me thinking about the foods that I’ve come across in the UK which are similar to products I’ve grown up with.

Let’s take Twisties, for instance. Over here, Nik Naks are a comparable salty treat, but they’re smaller in size and less fluffy.

Weet-a-bix have surprisingly grown on me. It’s hard to pinpoint the difference between our Sanitarium branded Weetbix – same size, almost the same shape, same texture, just slightly different taste. A bit like Vita Weats – they’ll do when the original isn’t an option.

Another is Jaffas. If, like me, you’re a fan of the chocolately orange goodness, then I suggest you get your hands on a packet of Mars Revels. The taste of the orange flavour is almost identical to Jaffas, but they’ve got more of a chewy texture, which works quite well.

I could go on forever, but another I just have to mention is a match for Fantales. Morrison’s Milk Chocolate Caramels (original name, hey) are a great alternative. They taste amazing; if only there was the trivia on the wrapper.