This is a kangaroo. Wait, is it a wallaby?

LIFE AFTER LONDON | It's suddenly dawned on me is that I'm an uneducated Australian who spent two years drowning out her Australian knowledge with beer and long flights on the other side of the world. 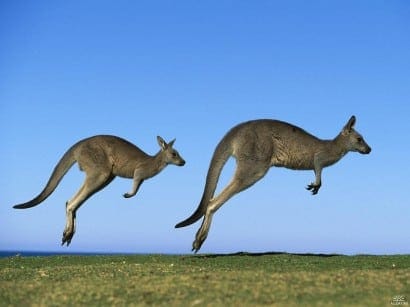 IN THE PAST month I’ve been lucky enough to welcome three of my friends from London to this Great Southern Land.

My boyfriend and two former housemates who I met in London, two of them British, the other a Kiwi, decided to follow the crowd and move to Melbourne.

This is exciting for me on so many levels. Not only does it give me an instant group of close friends in my new home city, but I get to show them everything that’s great about this huge nation of ours.

That seemed simple: An Aussie teaching a couple of foreigners about Australia.

But a recent trip to Apollo Bay made me realise how little I actually know about my homeland and all that it’s famous for.

Naturally, kangaroo and koala spotting were central to the ‘Welcome to Australia’  holiday I had planned for my Pommy boyfriend.

The only problem was that when we found some kangaroo-like animals hopping around a golf course at Anglesea on the Great Ocean Road, I wasn’t sure what they actually were. I’d been told it was a good spot for wallaby spotting, but they looked a hell of a lot like kangaroos to me.

“What’s the difference?” my boyfriend asked.

I was pretty certain that wallabies were smaller. And that they were a different colour to kangaroos. But I still couldn’t tell which species were hopping about in front of us.

‘This is stuff primary school classes are made of,’ I thought. Oh the shame!

With the exception of cockatoos and galahs, I described every colourful bird as a rosella. Because, well, there was the tomato sauce with the rosella …

And what about the Twelve Apostles. Are there actually 12?

So many questions and so few answers.

And I don’t even have an excuse. I’m just an uneducated Australian who spent two years drowning out her Australian knowledge with beer and long flights on the other side of the world.

Oh well, now is as good a time as any to start getting to know Australia again.

What is some of the Aussie knowledge you have forgotten? Comment below: