The great debate: chips vs crisps 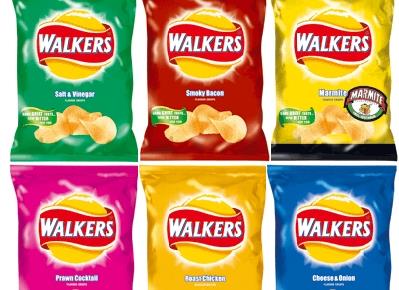 FROM an early age, children learn to associate a particular flavour of potato chip with a specific packet colour. In Australia, regardless of whether I wanted the tuck-shop lady to ‘hit me with a Samboy chip’, a Smiths chip ‘so good, every potato wants to be one’ or preferred Thins as they were ’not as thick as some’, the same colour scheme applied. Original were dark blue, salt and vinegar were pink, cheese and onion were yellow, BBQ were orange, chicken were green, and tomato-flavoured chips were red.

Meanwhile in England, the school kids were adding a packet of Walkers or McCoy’s crisps to their school dinners according to a whole different colour scheme. Original were red, salt and vinegar were blue, cheese and onion were green, chicken were orange and tomato and BBQ were unknown, while prawn cocktail was to be found in a pink packet.

You can imagine the culture shock I experienced when I fished a chip from a pink packet and instead of the heady hit of salt and vinegar, experienced the cheeky crustacean flavour of prawn cocktail. The English had already experienced what I term ‘chip-shock’ when Walkers unexpectedly switched the salt and vinegar colour from blue to green and the cheese and onion colour from green to blue. They seem to have now adjusted to this new state of affairs, which led me to ponder the applicability of the colours (should I ever be called upon to advise the big cheeses of the chip/crisp world on packet colours).

Original: Australian dark blue or English red? Neither colour particularly reflects the colour of a potato or salt. Potentially a white packet would be most suitable. I would advise the English to save red for tomato or chilli chips.

Salt and vinegar: Australian pink or English blue? Again, neither colour particularly reflects the colour of salt or vinegar. This is not a flavour you want to purchase by accident though, and the bright pink packet certainly warns the chip/crisp consumer that there is something surprising inside. Perhaps Australia should have saved pink for prawn chips.

Cheese and onion: Australian yellow or English green? Yellow, as the general colour of cheese seems to be a better option here. I suppose onions can be green, but never cheese, unless something has really gone wrong. Maybe save green in case pea or wheatgrass chips are ever a contender.

Chicken: Australian green or English orange? As it the case with cheese, there is probably something wrong with a chicken if it has turned green, so perhaps it is not a great colour for Australian chicken flavoured chips (unless they are green chicken curry flavour). Orange however is a natural colour for the buff Orpington breed of chicken. Named for the English town of Orpington, the original black Orpingtons were bred in 1886, to create a black bird that would exhibit well by hiding the dirt and soot of London. By 1894 they must have worked out how to keep their chooks clean and the buff Orpington, with its fluffy orange plumage was bred. Buff refers to the colour (of buff leather), and does not indicate a bird that works out at the gym, or is regularly nude.

Pringles, universally the same worldwide, use the English colour scheme with original in red, salt and vinegar in blue and cheese and onion in green. Perhaps I take more care when I buy Pringles, or perhaps I was never trained in Pringles colours at the tuck-shop; whatever the reason, I tend to read the flavour prior to purchase rather than relying on the colour, avoiding the chip-shock phenomenon. 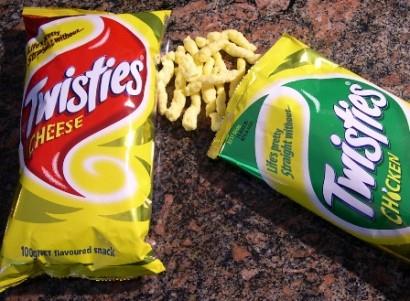 Twisties (not available in the UK — except at specific Australian food shops) also adhere to the Australian yellow for cheese and green for chicken colours. On a recent trip to Italy I discovered that their version of Twisties are called ‘Fonzies’. I kid you not, and I think I annoyed the owner of the Italian convenience store where I first spotted them by pointing and sniggering at his snack food display. Fonzies are a pale yellow colour and as they are baked rather than fried, they have a different texture and flavour to Twisties.

No discussion of chips/crisps would be complete without a shout out to English snack food, Wotsits. They look like styrofoam packing peanuts, but thankfully they taste a lot better, with a texture and flavour similar to Cheezels. Cheezels are not available in the UK (except at good Aussie food shops), so it has been quite some time since I have tried to whistle through one, as shown on the old ads. I was never able to do this, nor have I ever closed my fingers over a palm-full of peanuts and opened then to reveal a Snickers bar. Perhaps I just need more practice. Excuse me while I’m off to buy some peanuts, and possibly some Wotsits.