Our resident adventurer takes advantage of London’s ‘Open House’ weekend to find out what really goes on behind this city’s closed doors, and manages to cross both #16 King’s Place and #10 Wigmore Hall off her Top 100 list along the way. 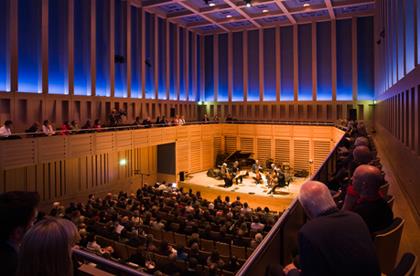 ONE of my favourite things about this city is that for many of London’s most beautiful and interesting buildings around town, it is free to just wander in off the street, browse around and generally soak up the atmosphere. And for those few that aren’t so easily accessible, the yearly event ‘Open House London’ (#100 on the London Top 100 list) provides a unique opportunity for us London nerds to get in and explore away.

For one weekend a year (the 2012 version is happening this weekend, 22-23 September) buildings that aren’t ordinarily open to the public throw open their doors and put on tours to showcase their amazing venues. From towering corporate offices, to new houses featuring incredible design, Open House London is a great way to get a behind-the-scenes look at some of the city’s iconic buildings. Many of these ‘sell out’ quickly, so get in early and enter the ballot to make sure you don’t miss out on a ticket.

Having missed out myself on something high up there on my list – the Gherkin, I decided I could still make the most of a free Saturday to tick a few others off my Top 100 list. First up was a visit to the Lloyds Building near Bank. This building is home to Lloyds Insurance, one of the most long-standing London firms — they even facilitated the Titanic’s insurance! The main feature of the building is the glass elevators rocketing up the outside of the building. Providing amazing views as you travel between floors — it’s a thrilling, if a little creepy, ride!

After Lloyds it was on to some more Top 100’s. We headed over to King’s Cross to tick off #16 — King’s Place. With so much construction going on at King’s Cross station it is hard to imagine there is still something left to visit. However, after stumbling across the marketing suite for the project and learning all about the future plans for the area, we continued on to King’s Place itself — a cultural hub for music, art, food and events which is a world away from the cranes and chaos. Located on the canals, it’s a great place to spend time eating at the restaurant, wandering through the gallery or hanging out near the canal in the deck chairs. Unfortunately we couldn’t relax for too long because we had to head over to #10 — Wigmore Hall.

Wigmore Hall is located just behind Bond Street and is an intimate concert hall venue. Lucky enough to arrive just before a performance started, not only did we get to view the gorgeous old building from the inside but also see in action what it was built for. After listening to the musicians play, we continued on to the green room and were rewarded with a backstage look at the stage. While it isn’t as grand as the Royal Albert Hall, Wigmore Hall is still a stunning place to hear some music.

Marking its 20th anniversary this year, Open House London is a fantastic way to see the city, so make sure to indulge your inner voyeur and head out there to get a private peak at some unique buildings.