One of the best things about London is that the places that are culturally enriching are usually free. Like art galleries, historical monuments, museums. Which brings our intrepid London explorer to #9 on her London Top 100 list — the British Museum. 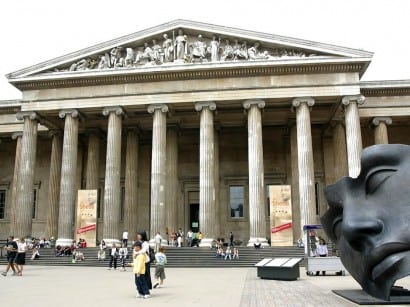 IT’S funny that one of London’s top attractions is called the British Museum, because there is nothing particularly British about it. It should really be called ‘the Museum of things we took from other countries when we visited’. Did you know they have the largest amount of Egyptian artefacts in the world outside of Egypt? There are probably figures missing all through the pyramids that are just happily sitting in this UK museum.

While the above might be true I have to say that I’m slightly glad that the artefacts were taken and are now shown on display because they truly are amazing to see. My friend, Shea and I arrived at the museum and soon got lost in the Egyptian galleries. We wandered through and saw the Rosetta Stone (for those of you playing at home this is the stone tablet that helped translate Egyptian hieroglyphs) as well as many other Egyptian artefacts including Sphinx heads and carvings and drawings.

Egypt isn’t the only country you can see, with much of the museum displaying galleries from all over the world. We wandered through the ancient Greece and Rome galleries with their columns and statues. After looking at many countries we decided to see if we could find anything from Australia and we stumbled across some of our neighbours, the Kiwis, artefacts in a display on Living and Dying. This room had a whole exhibit on how different cultures deal with life and death and I would have to say it was my highlight as I found it really interesting. One of the things that surprised me the most was a display of how much medication an average British person takes in their lifetime. There was a display of individual tablets laid out on a piece of cloth that lasted for metres!

From there we kept wandering and checked out the Chinese and Japanese rooms with their beautiful china and paintings however by this time our attention span was starting to wane. I could have gone on to visit all the other rooms and exhibits that caught my eye including one on the upcoming 2012 London Olympics and The Tomb of The Unknown Craftsman but our hearts and feet just weren’t in it.  After three hours we threw in the towel and vowed to come back again soon to see all that we had missed.

As we were in need of a bit of a sit down we headed across the road from the museum to Tea and Tattle, a teashop that is set up underneath a book shop and art gallery. It was a good place to rest our wearing legs away from the hustle and bustle (and by that I mean noisy children) of the museum. It was a great way to end our day of international sightseeing — all from one place, right in the centre of London. 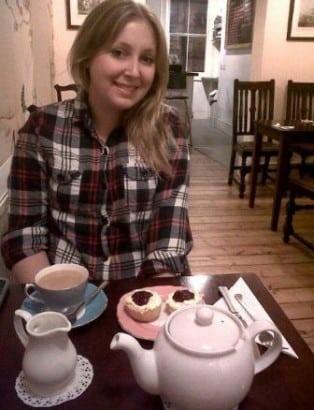