Taking in the Proms at the Royal Albert Hall

BRON IN THE DON | Our musically talented London adventurer indulges in London’s annual cultural festival — The Proms at Royal Albert Hall — and ticks #30 off her Top 100 list. 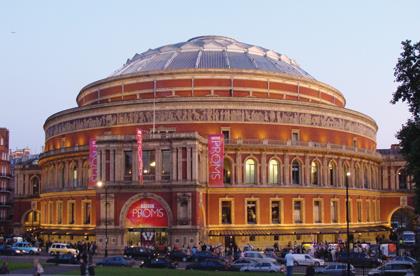 I WASN’T sure what to expect when I decide to tick #30 off the London Top 100 list. While I had been in the wind ensemble at school (yes cue band camp jokes) I hadn’t ever really been to a classical music concert but I was looking forward to checking out The Proms at Royal Albert Hall.

The Proms run every year from July to September in the iconic venue. A project of Prince Albert, the ‘Hall’ was built in South Kensington amongst a hub of museums to encourage promotion of the Arts and Sciences and has been used for a wide variety of concerts. It’s not just classical music though, with many musicians from The Beatles to The Killers playing in the gorgeous building. For the Proms however the main focus is on classical music with a few different acts thrown in. Last year Tim Minchin even made an appearance!

You can buy tickets for varying prices and dates (you can even got a whole season pass) and there is a wide variety of composers, orchestras, solo artists and featured shows to choose from. Since I wasn’t an expert and just going to explore I decided to ‘Prom on the Day’. We all know how the English love a good queuing system and this is just another great one to add to the list. After about an hours queuing, quite pleasantly next to Hyde Park in the sunshine, we got our tickets to the gallery. For £5-7 you can nab one of 1400 tickets for each concert and find a spot to view the show.

There are several options for Prom tickets from standing in front of the stage with the chairs behind you, to walking up the tiers to view over the balcony. We decided to head up to the gallery, which is the highest floor of the circular building but also provides a great view of the whole hall.

Up in the Gallery you don’t have to stand for hours and squish between the crowd as it was much more relaxed. People bring in food and cushions and make an inside picnic while others lay on the cool ground and listen to the music. We stood at the balcony for a little while watching the symphony play before settling into a spot on the floor. It was so relaxing just laying down and closing your eyes and listening to the music!

If sitting in a hall listening to music isn’t your thing – never fear the final show of the season is always held across the road in Hyde Park. ‘Proms in the Park’ is the grand finale of a whole season of great music. Tickets for this event are £35 and this year our very own Kylie Minogue has a spot on a long lineup of musical talent.

The Proms is definitely one of the Top 100 that I have enjoyed the most and I will make the effort to repeat again. Hopefully I get to see a different kind of musical talent and will be able to compare the relaxing music in the gallery to a seating ticket for a more up tempo gig. Either way I highly recommend a visit to the Royal Albert Hall.