BRON IN THE DON | The beauty of London is the myriad of amazing stuff this great city throws at us and when our London adventurer heard you could explore the local Science Museum via cocktails and discos, she raced on down to tick two off her list. 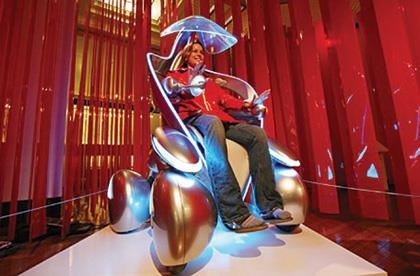 NOW I’m not much of a science geek with things like physics and chemistry going right over my head but I was still keen to check out the Science Museum and I thought what better way to do it than with a cocktail in hand.

No, you can’t usually wander the science museum with a cocktail but I decided to combine two of my London Top 100 list (#46 — Science Museum and #72 London Lates) and go on a late night visit. Many of the museums open up their doors for extended opening hours either every week or more exclusively.  The Science Museum open their doors on the last Wednesday of every month

The main feature of this event was the new Alan Turing exhibit dedicated to the code breaker and his work.  The exhibit was packed full of other attendees so I didn’t get to see as much as I would have liked but what I did see was fascinating as it features some of the earliest technology in artificial intelligence amongst his other work of codebreaking during the war.

From there it is on to the many other exhibits that the Science Museum is famous for. It is the most interactive museum I had visited by far, and I spent a long time in the “Who Am I?” exhibit playing with the touch screens and learning about a range of human features. From how the mind works with regards to phobias, to how your gender defines you, this whole area was probably the only part of science that didn’t go over my head.  One of the benefits of going to a adults only late night session is you don’t have to fight kids for the touch screens!

The late night isn’t just cocktails and freedom to be a big kid, the museum offers a wide range of guided tours around many of the exhibits such as The Making of the Modern World, for those who are a science geek at heart. There are also workshops such as ‘swagger studies’ by the Oxford Brookes University and Turing Sunflowers where you can grow your own flowers. If workshops and demonstrations aren’t your thing you can try your scientific knowledge at the pub quiz or even meet the man or woman of your dreams at a speed dating session.

A favourite of mine however is the Silent Disco, where you all wear headphones and boogie around like a dork to either channel you can hear while the rest of the museum is left to ponder what song you are breaking it down to. For those who prefer live music — don’t’ fear there is also some of that too. Basically, late nights provide so much entertainment it’s hard to spend time visiting the actual museum.

I would highly recommend a visit to the Science Museum as I do find it the most interactive and different museum and for someone like me with a short attention span it is perfect. However, make sure you don’t miss these late nights, they are widely popular and the lines are quite long but they are a cheap fun night out where you can have a few drinks, hang with your friends but also learn something along the way.