EXPAT FACTOR | In between conquering Europe and soaking up the London lifestyle, SOPHIE HART works on projects which can make a real difference to the world as a Senior Designer and Production Manager at CBI, The Confederation of British Industry. 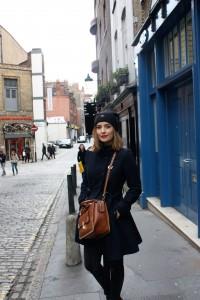 In between conquering Europe and soaking up the London lifestyle, SOPHIE HART works on projects which can make a real difference to the world as a Senior Designer and Production Manager at CBI, The Confederation of British Industry.

My husband and I moved to the UK in August 2012. It was amazing timing as we arrived on the same day the London Olympics started. The atmosphere in the city was incredibly positive.

We had always wanted to work in another country. We had a big three month holiday/honeymoon trip around the US already planned for the year, so we decided to bite the bullet and tie it onto the end of the trip. The motivation behind choosing the UK in particular was its proximity to Europe. I have a Dutch passport, so anywhere in Europe would work for us. My husband works in finance so the UK felt like the right choice.

Originally we planned to stay in the UK for about two years, we’ve been here for over a year now and it’s gone far too quickly. It will take us a few more years to conquer Europe while working and soaking up the London lifestyle.

I am currently working as an in-house graphic designer for CBI (The Confederation of British Industry). The CBI is a lobbying organisation that represents businesses from all sectors and sizes. We publish influential research reports, surveys and forecasts, while also holding quite a few conferences and events over the year. I also manage the schedule for a team of four designers, which keeps me incredibly busy. The role is very diverse; I can work on anything from a report or campaign, to emails, event design and brochures.

Working for a lobbying company is definitely the best way to learn about a country. The projects I work on cover such a broad range of topics. The reports provide recommendation on policy effecting things such as the UK’s relationship with Europe, exports, energy, infrastructure, banking and education. And it’s nice to know the projects will make some change in the world. I was quite excited to hear Barack Obama and David Cameron have seen a couple of the reports I’ve worked on.

I also worked as a makeup artist back home (alongside my design work). Coming to the UK, I knew I had to choose one or the other to have a social life. I went with design as I can have guaranteed work and regular hours. It was tough as there are so many great opportunities for makeup artists over here, but work-life balance is very important to me.

I love the amount of annual leave they have over here. Five weeks plus all the public holidays is amazing! Travel is always on the agenda and I’ve been to quite a few different places in Europe now but there’s so much more to discover. The flights are so incredibly cheap over here, you can pretty much go anywhere you like for a long weekend. It’s still crazy to think you can say “Might just pop over to Rome for the weekend.”

I miss Australia’s weather, of course. I also miss being able to buy quality meat from the supermarket and they don’t really seem to have delis over here. I like and dislike some things about the NHS. It’s frustrating having to register with a local GP, but fantastic that it’s free. I still walk out a bit unsure if I have to pay for anything, it’s a very strange feeling!

I also miss my family and friends back at home. I went back in May this year for a friend’s wedding. We have another wedding in September next year that we’re going to as well. If I had a money tree or a teleportation device, I’m sure I’d be over once a week.

I highly recommend people visit Bath if they haven’t been before. The architecture is so different and the surrounding countryside is breath-taking. Within London, definitely visit Tayyabs in Whitechapel for the best Indian cuisine around!

My other advice would be to get to know the different areas of London a bit better beforehand I’m still terrible with directions and location names, I pretty much just follow my Google maps everywhere. And be prepared for earning less.

Looking ahead, my plan is to work hard and play hard for the next few years and see as much of Europe as possible. If I can grow in my career all the better, but it’s primarily about enjoying the travel and taking in the culture. We’ll eventually go back to Perth to have kids.