Should I stay or should I go?

GO HARD OR GO HOME: It’s that time of year when Antipodeans begin their mass evacuation from the UK and I am asking myself, ‘Should I stay or should I go?' 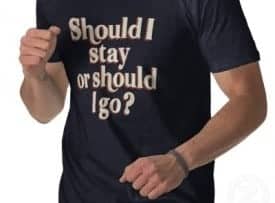 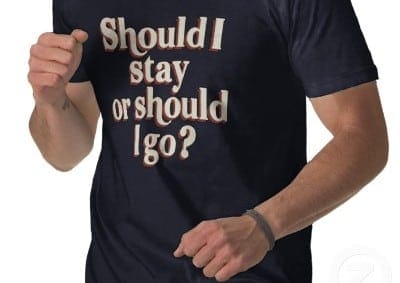 IT’S that time of year when Antipodeans begin their mass evacuation from the UK.

Summer is as good as gone, and so are many Aussies and Kiwis.

The season of festivals, holidays and picnics is history, and so the appeal of warmer climates Down Under proves too hard to resist for many of us.

But for some, it’s more than just the weather driving that’s them to Heathrow — it’s a matter of law, as their two-year working visas expire and they have no choice but to leave.

It’s an emotional time, as we’re forced to say goodbye to friends who have become like family for the past little while.

I’m lucky enough to have a grandparent who was born in the UK, entitling me to a five-year ancestry visa.

But when I left Australia I thought two years would be more than enough time, so I took the easy route and went with the youth mobility visa. Silly.

Now, as my two years come to an end, I am asking myself, ‘Should I stay or should I go?’

If I stay I have to go back to Australia to apply for the damn thing, which means spending an unknown amount of time away from my job and my flat while it is processed, forking out a load of cash in the process.

But considering I spent the bulk of my first year in London setting up a life, ie finding a job that is tolerable, a house that’s livable and making friends whose company I enjoy, it feels like a bit of a waste to go home now and throw away all that hard work.

But as I watch so many of my Australian and Kiwi friends leave, I find myself wanting to do the same.

Naturally, they’re talking about the things they’re going home to — reunions with family and friends, amazing weather and things I never thought I’d miss, like owning a car again.

I know the fact that I can make either of these two wonderful countries my home is a privilege in itself, but it doesn’t make my decision any easier.

Until I decide, that repetitive song ‘Should I Stay or Should I Go’ by The Clash will keep on playing over and over in my head.

If only it could point me in the right direction.

What should I do? Are you, or do you have friends, in the same situation? Comment below now.