‘Ripperologist’ for a night: How to lead a Jack the Ripper walking tour

A Jack the Ripper walking tour is an essential item on many visitors to London to-do lists. PAUL BLEAKLEY indulges a secret childhood desire to be a ‘Ripperologist’ and leads a Jack the Ripper tour of his own around London’s East End. 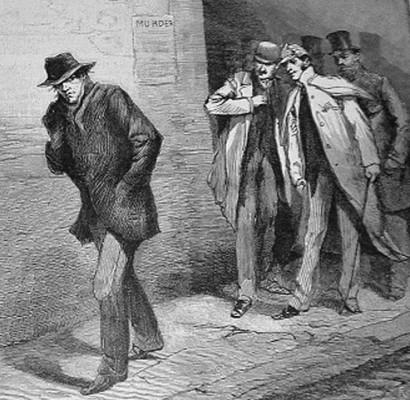 TO THE uninitiated it may seem like the swarms of people furtively darting down a non-descript alleyway off Aldgate High Street after dark are involved in the kind of nefarious behaviour that characterised the East End of old.

Exploring the alley itself will not provide much more insight: all that is there is a cobblestoned square surrounded by office buildings and a school playground. The only thing particularly striking about it is that it is a dark place for, one can only assume, particularly dark deeds.

It is precisely this quality that makes Mitre Square one of the City of London’s most abstract and beguiling attractions. Straddling the border of the City and the eastern boroughs, Mitre Square plays a central role in one of the most notorious stories in London’s sordid history. In the early hours of 30 September, 1888, the body of local prostitute Catherine Eddowes was found in Mitre Square. She had been brutally butchered in a matter of minutes on the very cobblestones that cover the square to this day.

As gruesome as it may be, ‘dark tourism’ is a subsection of modern travel that has experienced rapid growth in recent years. There is something inappropriately fascinating about revisiting sites that hold such a history of terror and, depending on your views on morality, evil in its purest form. This is what makes a Jack the Ripper walking tour through East London an essential aspect of many travellers’ to-do lists.

World-renowned Ripperologist Donald Rumbelow, former curator of the City of London Police’s Crime Museum, leads one such walk departing from Tower Hill Underground Station. Rumbelow was the man chosen to instruct Johnny Depp on Ripper lore in preparation for his role in the feature film From Hell and speaks with great authority on the wild variety of theories associated with the identity and motives of the murderer lurking in the shadows of 1888.

I took Rumbelow’s tour of the Ripper’s murder sites in the summer, at a time when I was far less confident wandering around areas like Whitechapel, Stepney and Bethnal Green than I would become as the year went on. When my housemates made the passing comment a few weeks ago that they would love to do a Ripper walk themselves, the solution became clear: I would lead my own tour of the East End. I would become, for the night at least, a Ripperologist.

The rendezvous point for the Inaugural Paul Bleakley Ripper Tour was at Crosswall, a stone’s throw from the Tower Hill Station and within walking distance of the first noteworthy sites associated with Jack’s reign of terror: the prostitute’s church St Botolphs-without-Aldgate and the place where Catherine Eddowes met her untimely end at Mitre Square.

My unofficial tour has its first awkward moment on a corner in Goulston Street, the place where the Ripper infamously left a piece of Eddowes bloody apron as he fled the scene of her death. It is on this corner, as I explain some of the more fantastical conspiracy theories related to the Ripper legend, that we cross paths with an official walking tour consisting of around thirty amateur historians trying to crack the case of the Jack the Ripper 124 years after the killing spree ended. The awkward moment was averted when the official tour group takes position on an adjacent corner. I chalk this up as a win for my first tour group in the notoriously competitive industry of Ripperology.

The tour twists and turns its way through the streets of East London, stopping off at the increasingly brutal murder sites on White’s Row (now a parking lot), Hanbury Street (empty office space) and Durward Street (renamed after the street’s original name ‘Buck’s Row’ became synonymous with prostitution and murder). I have tried to cater for everything on my first ever tour as a Ripperologist: we stop on Brick Lane for the standard Bangladeshi curry and I have accounted for the time it would take for a pint at two separate ‘vintage’ pubs along the way.

Following the path of the Ripper is the perfect, albeit disturbing, way to explore the rich history of London’s inner east. On a cold winter’s night it is easy to imagine the foggy alleyways that Jack would have walked, and the terror that would have been felt by every person living in the rough and tumble world of Victorian London.

A letter allegedly sent by the Ripper to chief of the Whitechapel Vigilance Committee George Lusk challenged those in pursuit to “catch me if you can”. Over a century later, the hunt is still on. It is up to the amateur historians walking in the Ripper’s footsteps to do the best they can. Answer the call, join the hunt. And get yourself a decent curry along the way.