Qantas Australian Woman of the Year in the UK Award 2014

The winner of the 2014 Qantas Australian Woman of the Year in the UK Award will be announced on 11 March, at a reception at the Australian High Commission. 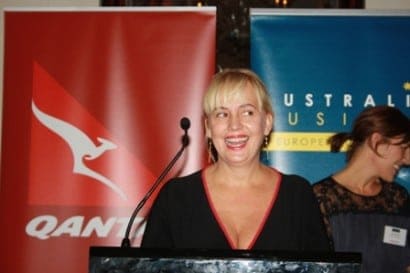 Proudly sponsored by Australian Business and Qantas, and supported by the Australian High Commission in London as well as Australian Times, the Award celebrates the achievements of Australian women living in the UK.

It highlights women succeeding in a range of endeavours, including business, the arts, sciences government and the community sector. The judges received a strong field of nominations, and the Award finalists will be announced prior to the event.

The reception will be an inspiring and engaging evening, with guest speaker the Rt Hon Baroness Liddell of Coatdyke sharing highlights from her outstanding career, including as British High Commissioner to Australia.

Paola Totaro, award-winning Australian journalist and president of the Foreign Press Association in London, will be MC on the night.

Guests at the reception will also have the chance to win amazing prizes, including a £500 Westfield voucher and a 2 night weekend stay at the ME Hotel London.

Tickets to the Award Reception can be purchased online at www.australianbusiness.co.uk or by phoning the Australian Business team on 020 7099 8444.