Praying at the altar of sin: Sunday at The Church

All in the name of investigative journalism, PAUL BLEAKLEY goes undercover (no one ever suspects ... the mime) and embraces the quintessential Aussie in London experience: Sunday at Clapham’s The Church. 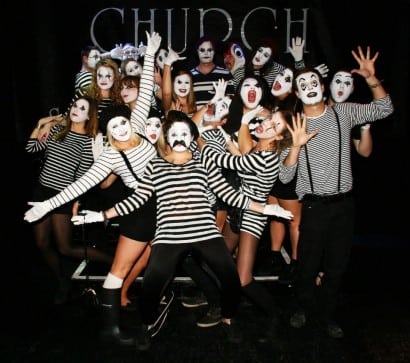 “YOUR friend is the most depressing mime I’ve met in my entire life.”

I was sitting on the top level of a stereotypical red double-decker bus, attempting (in vain) to engage a couple of recently arrived Australian girls in banter when I heard those now immortal words.

There comes a moment in life when you begin to question whether what is happening around you is real. Was I really in London, chatting up girls on a bus in the middle of the afternoon while dressed as a mime? And did this girl really just imply that she had met a number of mimes in her time, and my friend was the most depressing? Aren’t mimes supposed to be a little bit sad, or is that just clowns? How did I get to this point in the first place?

A lot of bizarre things happen to Australians living in London. The mystique of living in a foreign country is almost exclusively derived from the adventure of finding yourself in an odd situation that you never dreamed you would be in. Maybe that is why so many young Australians flock to The Church every Sunday, descending upon Clapham like a marauding plague of locusts laying waste to every sober person with the misfortune of being in their path.

The Church was born in 1979, at The Golden Lion pub in Fulham Broadway when a group of hung-over Aussie and Kiwi backpackers combined the standard antipodean Sunday session with the debauchery of striptease and stand-up comedy. Over thirty years have passed, and The Church has moved venues several times (it is now located at The Clapham Grand), however the spirit of 1979 lives on for the millions of ex-pats that have passed through its hallowed doors.

After being in London for a number of months it felt like it was well passed time to experience The Church, and the birthday of a friend seemed like the perfect excuse to head down the rabbit hole into a world of insanity. All of the reviews of The Church had painted it as a rowdy and raucous weekly event, and something that we had to prepare for both mentally and physically. As we arrived, it appeared that some people had ‘prepared’ a little too much: the streets were already overflowing with girls stumbling off their heels and boys in mankinis casually standing in ATM queues.

The scenes on the streets of Clapham did not bode well for the rest of the afternoon. Any place where people are that drunk outside the venue can only be exponentially worse inside. I was pleasantly surprised to find I was wrong: the patrons of The Church all seemed to understand that they were there for the shared reasons of wild revelry, and as such there was no aggressive posturing or confrontation. With a cheeky nod and a conspiratorial grin, strangers recognised in each other the type of bond that can only result from a man in a Mario outfit and a pirate silently agreeing to let loose and cause carnage.

There are a lot of unusual aspects that make The Church a unique experience, beyond the tendency of patrons to come in fancy dress: drinks are supplied in plastic bags to ensure smooth bar service and the stage performances range from random to crude. For the uninitiated punter it might seem off-putting to be told jokes by a man wearing an unexplained prosthetic phallus, and it might be quite shocking to bear witness to what can only be described as a fairly predatory lap-dance. The people that go to The Church understand, however. They walk through the doors knowing that anything could happen, and often does.

The rest of the afternoon is something of a blur. People I met at the unofficial after-party for The Church at the Shepherd’s Bush Walkabout awkwardly informed me that I had already met them earlier in the day, to which I flirtingly responded that I was sure that I would remember a face like theirs. Unfortunately, I was informed afterwards that I had in fact spent almost half an hour speaking to the people in question earlier. But hey! It’s The Church, these things happen.

A visit to The Church is, if you will pardon the pun, an almost religious experience for the Australian or Kiwi living in London. It is something far beyond your wildest expectations, while at the same time providing the odd sense of comfort that comes from a group of strangers gathering with the purest of intentions to have a good time together.

I found myself trudging home on a bus from Wandsworth on Monday morning, thankfully without mime make-up caked on my face yet still looking disconcertingly out of place in the rest of my costume from the day before. Most of the commuters on their way to work averted their eyes awkwardly; however somewhere near Fulham a young woman stepped onto the bus and stood nearby. Our eyes met and her mouth turned up at the corners in a barely disguised grin.

“The Church?” she asked in an Australian accent that had been tempered by too long living amongst the English natives. “Yes,” I responded with a deliriously tired nod. The Church indeed.