Looking for somewhere you can have a pint and a punt (the English punt, not the Aussie), all served up with a side of history? Our Oxford Aussie local, AMBER ROSE, shows us her city as seen through the bottom of a glass. 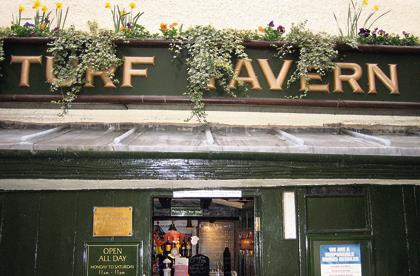 OXFORD is known as the city of dreaming spires, and I really couldn’t think of a better sentence to describe it.

From the cobbled streets of the city to the hidden quadrangles of the ever-present University, it is the kind of place where dreams are made, dreams are lived, or dreams float away without ever being realised.

In summer, punts are lazily steered down the Isis (what the locals call the Thames) in a haze of sunshine and Pimms, with the sound of University cricket matches punctuating the drone of fat bumblebees.

Come winter and the city hides her secrets away, behind the doors of low-roofed public houses hidden in alleyways, but not so well-hidden that the local students or odd antipodean can’t seek them out.

As home to the oldest University in the English-speaking world, Oxford is inevitably steeped in history, and has been home to many significant individuals and colourful characters over the years.

From Alice in Wonderland to the Lord of the Rings, Inspector Morse to Henry the VIII, Radiohead to Harry Potter, there is something to capture everyone’s imagination amongst the magnificent architecture of Oxford city.

One thing to keep in mind is that you’ll not be the only one hoping to experience some of the magic that Oxford has to offer. Just like London, it is Always Busy. Full of tourists, students, dons and locals at all times of the year, not to mention the occasional celebrity and film crew. The streets are always teeming with people.

One way to avoid the crowds is to do what many have done before you, and duck into a local pub to mull the day away over a pint. Oxford has its fair share of pubs, as do most English cities, but there are four I recommend you not to miss.

First on the list is the Turf Tavern, self-proclaimed to provide “An Education in Intoxication”.

The Turf is tricky to find, so head to another Oxford favourite (and great photo opportunity) – the Bridge of Sighs, and you will see the alleyway tucked away to the left.

Should you be fortunate enough to find the alleyway that leads to the Turf, you will be able to follow in the footsteps of one of Australia’s national treasures, our very own Bob Hawke, who in 1963 entered the Guinness World Book of Records for drinking a yard glass of ale in 11 seconds at this very establishment.

For those not yet familiar with their imperial measurements, a yard glass holds the equivalent of two and half pints. Not a bad feat. Have a hunt in the beer garden for a chalkboard commemorating our Bob’s great achievement.

Head of the River

For a bit of a different, yet still very Oxford vibe, the Head of the River gives the clue in the title. Located on the banks of the Thames by Folly Bridge, just down from Christchurch College, it takes its name from the famous boat race against Cambridge. And if there’s one thing Oxford takes seriously, it’s a boat race.

You can see the Oxford University boathouses from the Head of the River, and more often than not crews training relentlessly, regardless of season or temperature. In summer you’ll be hard pressed to find a table outside here, for though the prices at the bar reflect the quality of the view, it’s worth every penny.

Even in winter it’s a charming place to visit, with plenty of outdoor heaters and glimpses of the river from the windows inside if freezing to death isn’t your thing.

Next on the list is the Eagle and Child, or Bird and Baby if you want to make like a local. Owned by the University, it has previously been home to a writer’s group which included The Lion, the Witch and the Wardrobe author C.S.Lewis, along with J.R.R.Tolkien.

It has been refurbished over the years, and no longer has “the Rabbit Room” where the writers would once meet, but is still quaint enough to give you a feeling for what those times might have been like.

Finally The Bear Inn, or just “the Bear”, rounds out my list of quintessential Oxfordian pubs. It claims to be the oldest pub in Oxford, which seems a flimsy claim as it is now in a different building from the original coaching inn it once was.

Nonetheless, it is worth visiting for its other claim to fame, a collection of over 4,500 neckties which line the walls and the (very low) roof of this tiny pub. For whatever reason, the tradition started in the 1950s when the landlord began exchanging half pints of beer for the snipped end of a customer’s tie. Before you get any ideas about free beer, and head to Oxford wearing twenty odd ties, it’s worth noting that this tradition no longer carries on today.

The Bear has also featured in Inspector Morse, as has the Turf, the Head of the River and the Eagle and Child — that bloke sure liked his pubs.

I strongly suggest you follow in Morse’s footsteps, and let your own feet take you along the well-trodden pub trail of Oxford. Though I wouldn’t as strongly suggest following Bob Hawkes example … unless your time in the mother country has really, really given you a taste for ale.