Our London: Spotlight on Paddington – Top 5

OUR LONDON | Each week an Aussie Times writer will bring you a top five list from their favourite neighbourhood. This week GARETH MOHEN takes us on a journey to the centre of London, with his Top 5 on Paddington.

by Gareth Mohen
in Expat Life 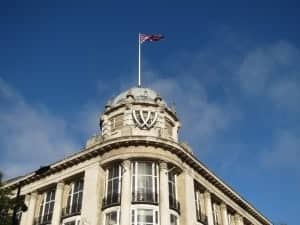 BEST known for a particular bear, the main access point to Heathrow from the city, proximity to the kebab and shawarma heaven of Edgware road, and a half hour walk from Portobello Road Markets; Paddington is in the middle. Not a standout part of London, but certainly a well-known name, this is where I’ve called home for the past year.

You could easily spend an afternoon here and see some of the iconic parts of London’s heritage past, present and future. With the new Crossrail being built, Paddington and the surrounds are about to see a spike in interest, and value.

When the top of the top five is a monument to a fictional character, you know this is worth a visit:

1. Paddington Bear Statue
This Peruvian bear created by Michael Bond is synonymous with the train station and the general area. So it is with good reason he takes pride of place overseeing the action of the train station food court — presumably scouting for any stray marmalade related foods. The statue itself was constructed by sculptor Marcus Cornish, with a design based on the original Paddington illustrations by Peggy Fortnum. The British Library currently has an exhibition Picture This: Children’s Illustrated Classics that goes into further detail about the various incarnations of this lovable bear. My key-ring plays host to a plush incarnation of the bear.

2. Grand Union Canal
Emerging from the Hammersmith and City line exit of Paddington Station brings you face to face with Grand Union Canal. Despite not living on the water, it’s nice to know the opportunity to hit up the water is nearby. In recent months the canal has played host to The Floating Stage (a converted house boat come-mobile bar and stage) and currently Word on the Water (a converted house boat come-bookshop).

3. Whiteleys
Probably more in Bayswater than Paddington, this shopping centre is walking distance from my house so let’s talk about it. For an Australian, it is a reminder of the mall convenience and experience. Most of London is about the high street. Whiteleys is classy and slick compared to the grungy roughage of abandoned store fronts and cheap eateries along Bayswater’s high street. The locals however seem to prefer the character of the high street, and truth be told it’s not all that bad. But things are going to change with a secret Brunei family reportedly buying out more than 75 per cent of the high street, including Whitleys. So £500 million later a transformation is on its way and Whitleys is going to be the centre piece.

4. Sheldon Square
This sanctuary of space between the high rises of Paddington provides an amphitheatre of tranquil escapism for the busy city slickers during their lunch breaks. Restaurants skirt the edge of the square providing plenty of eating options and again you are near to the waters of the canal. However, truth be told, the square is more circular in parts than square. But this should not detract from the pleasantness of the area.

5. St Mary’s Hospital
Catching the 159 bus home involves a trip past this grand old medical establishment. But it was the white vans topped with satellites that drew my intertest as early as June this year. Of course it was the eager global press camping out with the hopes Prince George would make an early appearance. But if the long list of royal births — William, Harry and Zara Phillips amongst others — witnessed at this hospital doesn’t attract you to visit, apparently the great Kiefer Sutherland was born here also.