BRON IN THE DON | With the Carnival madness behind us for another year, our resident adventurer looks back at Europe’s biggest street party — and #99 on her London Top 100 list. 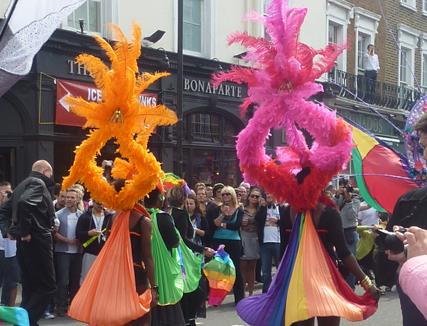 ALTHOUGH most Antipodeans try our best to get away over a long weekend, this year I was glad I didn’t have anything booked. It gave me the chance to attend one of London’s biggest parties. Every year on the August Bank Holiday weekend, the Notting Hill Carnival (#99 on the TimeOut Top 100 list) is one of the most popular celebrations held in the city. Famous for its dancing, parades, food and partying, the festival is celebrated over two days. In my opinion this just isn’t long enough!

I headed to Notting Hill with a few friends on the Monday, which is apparently ‘adults day’. However many people still party on the Sunday even if it is ‘family day’. We arrived around midday and wandered up from High Street Kensington, as due to the large crowds they had closed Notting Hill Gate Tube Station. As we were walking we heard the festival before we saw it. We heard the bass of the music reverberating through the streets, before we turned a corner and saw amps and speakers stacked high on top of each other. A few streets down there were more music coming out of even more speakers — it certainly helped create a party atmosphere.

We wandered through the streets and people were selling souvenirs, flags and whistles – if you are one of the festival attendees that aren’t already dressed up — because, basically, dressing up is certainly what this festival is about. Once the parade starts you can see some amazing costumes. Huge feather head dresses, teeny tiny little glitter g-strings, massive butterfly wings and extravagant shoes are just a few components of these costumes. You just can’t take your eyes away from them. Watching the people on board floats in the parade, proudly dancing, drumming or singing their way along the route you can’t help but be caught up in the atmosphere. You can see the pride in their country and culture on their faces, and the enjoyment is infectious.

After the hustle and bustle of the parade and wandering the streets, it was time to move on to what I thought was some of the best part of the festival — the food! There is so much on offer it’s quite hard to choose just one meal to have. In fact I had two. I grabbed a massive charcoal grilled corn on the cob and devoured it before I found my next meal offering a selection of freshly cooked Caribbean food. Salads, jerk chicken, rice, dumplings and veggies all for about £6 is hard to say no too. There are also cheap drinks around the place too, from legal off licences selling Red Stripes, to not-so-legal establishments popping up to give out drinks to passers-by.

Even though I was only there a few hours I had heaps of fun and look forward to next year when I can make a whole night of it!