EXPAT FACTOR | As UK campaign manager for the Australian Greens, Mat Hines has managed to combine his full-time career as a lecturer with his passion for politics. He talks to Australian Times about why it's important for Aussie expats to maintain an interest in politics back home, ahead of this weekend's federal election. 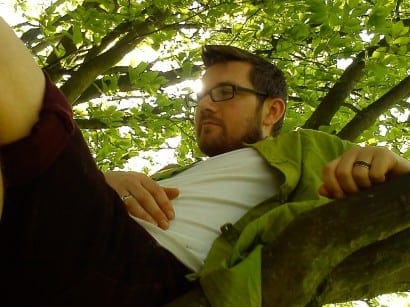 I moved to the UK in February 2009. I had planned to spend four years travelling the world teaching English; the UK was my first stop. I only planned to come here for 9-12 months, but I met my partner in late 2009 and we became civil partners in 2010. I’ve now been here four and a half years.

I am now the Higher Education Programme Leader (Travel and Tourism Management) at North East Surrey College of Technology (Nescot). Prior to this I worked at Mayfair College. At both of the colleges that I have worked at, I have been involved in building successful travel and tourism management programmes and have been able to progress my career into academic management. I love teaching and seeing my students develop their skills, be that in English or Travel and Tourism Management. Working in the UK has given me the opportunity to teach students from a different range of backgrounds than I would experience in Australia, with many more European and South American students choosing to study in the UK.

In addition to my full-time job I am also spearheading the Australian Greens UK campaign. I have volunteered on almost every Greens election campaign since 1998, so when I was living here and an election was called back home it seemed only natural to get involved here. Having co-ordinated campaigns in Australia I took on the role here.

It’s important for Australians living in the UK to maintain an interest in Australian politics. For most Australians, living in the UK is likely to be a short-term thing — unless you have the benefit of ancestry. As such, knowing that the country you intend to return to is heading in the right direction is important. The lurch to the right that we have seen from both the Coalition and Labor has also damaged the international reputation of Australia — whether that be cruel and internationally condemned treatment of asylum seekers, the failure to support marriage equality or the back flips on addressing climate change.

I think for many Australians, just like it was for me, the attraction of the UK is the opportunity of basing yourself in Europe while having the opportunity to work and develop your career. UK society is very divided, whether it be along class, wealth, ethnicity or regional lines. Also, it represents the failure of one of the richest countries in the world to use its wealth of recent decades to invest in education, housing and transport. This failure has led to many of the problems now prevalent in the UK. On the positive side, London’s free community festivals in summer — such as Lambeth Country Show – are a real highlight.

I love my local neighbourhood, Crystal Palace, which has a great festival in summer. Brixton Village market is one of my favourite places to go in London. Farthing Down and Happy Valley, south of Croydon, are great for a bit of countryside on the edge of London. Every second weekend I spend with my step-daughter so we spend a lot of time exploring London’s parks or walking in the countryside.

Brighton is a regular weekend trip for a bit of salt air. Lulworth Cove was a recent discovery that I’ll go back to. For a hit of heat and arid landscapes the Greek islands, Italy and Morocco are all favourites.