Make like Boris and get on your bike around London

Pedal power is taking over London’s streets. And thanks to Mayor Boris Johnson and ‘his’ public bikes, Londoners and travellers are encouraged more than ever to cycle through the city. Our London adventurer ticked another one of her London Top 100 list and got herself in a spin. 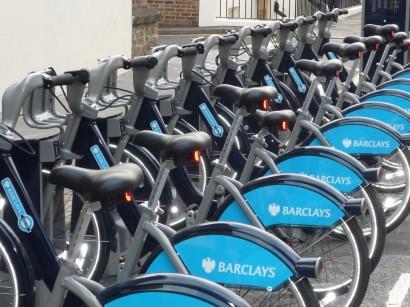 BEFORE starting my European adventure of living in the UK, I hadn’t ridden a bike for about six or seven years (except for exercise bikes and lets face it — I didn’t do that too often either). But once I had done my first bike tour in Paris — I was reminded how fun and quick cycling could be. Before long I was signing up to do them again and again across Europe including amazing places like Barcelona and Amsterdam. There was something about riding through the streets in the sun that made me feel like a kid again.

Back in London I didn’t get a chance to experience this much as I am not brave enough to attempt cycling on these crazy streets just yet. It’s ok when you have a tour guide and about 10 other cyclists around you but in London it’s just you and that giant double decker bus that doesn’t mind cutting corners. Luckily for me, wanting to relive my younger years, there are ‘Boris Bikes’ and lots of green space.

The Barclays Cycle Hire Scheme provides bikes for London citizens to use for a small fee and they can picked up and dropped off at key points in Zone 1 in Central London.  It is only £1 for an access fee to hire a bike for 24 hours and within that time you then pay for the cost depending how long you use it (and for the first half an hour it is free!). Many people use the bikes to fasten their commute but for those of us who probably still need training wheels, these bikes are perfect for a great way to see one of London’s great parks.

One of my favourite places to ride through is Hyde Park because it is such a fun thing to do after visiting many of the other great London days out. You can ride from South Kensington after visiting one of the museums or escape the hustle and bustle after shopping at Oxford Street, Knightsbridge or the Portobello Road Markets — all of these locations have docking stations close by. It’s also a really easy way to cut through town to go down to Green Park and see Buckingham Palace. 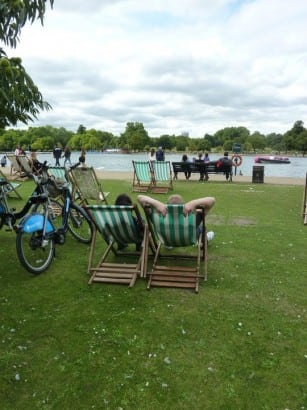 It’s also a really great way to get out into the sun (when it shines) and see one of the most buzzing places in the city. After winding your way around the park and through the bike lanes, you can grab a snack from one of the little stalls, park up at the Serpentine, lax out on the deck chairs and have a rest while you people watch.

Hopefully I can work my confidence up into using these bikes for getting from A to B but until then I’m happy riding around in parks like a big kid!  Trust me — it’s fun, and if you haven’t already do like the book says — and get pedaling!