Love shines through the chaos

GO HARD OR GO HOME | Through the destruction, violence and despair caused by the recent riots in the UK, there was one thing that brought a smile to my face — seeing all the love being sent from Down Under. 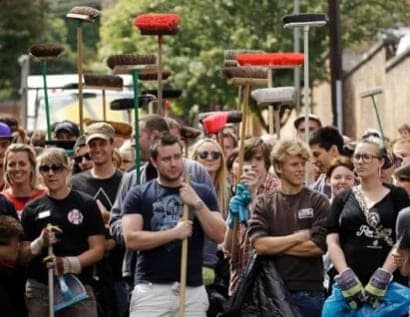 THROUGH the destruction, violence and despair caused by the recent riots in the UK, there was one thing that brought a smile to my face — seeing all the love being sent from Down Under.

While many of us were frightened by the carnage that spread almost as quickly as an Australian bushfire on a hot, dry, January day, the contact from concerned family and friends back home was heartwarming.

I’m sure every expat who lives in the UK has at times felt removed, perhaps even forgotten, as life at home carries on without us.

But the messages and calls that I, and every other Australian living in the UK, received from worried loved ones during the riots was overwhelming.

To be honest, when the riots began I crossed my fingers and hoped that my family wouldn’t hear about the chaos.

There are some things that happen in this big scary city that I’d rather they didn’t know about, for the sake of their sleep patterns and heart rate, more than anything.

But on day three, as the carnage escalated and violence infiltrated the city, I knew it was only a matter of time before Mum and Dad got in touch. There was no way of hiding this.

As I sat in my Wandsworth flat, listening to the sirens and helicopters, breathing in the smoke and watching the heartless thugs destroy Clapham Junction, I was surprised to find myself actually hoping they’d call.

From 10pm London time, (7am AEST time) the Facebook messages and texts began — Australia was awake.

Some of my friends Down Under even changed their Facebook statuses, writing messages of concern for the safety of Londoners or words of hate for the imbeciles who caused the chaos.

My Dad (bless him) even offered to book me on a flight out of London so I could escape the carnage for a week or so.

Thankfully, it never got to that stage, so I declined, however, the idea of spending a week in Spain was certainly appealing.

I know people lost their homes, their businesses and their communities, so this thought must be little consolation, but it’s worth noting.

Thanks for your kind thoughts everyone, it certainly lifted my spirits.